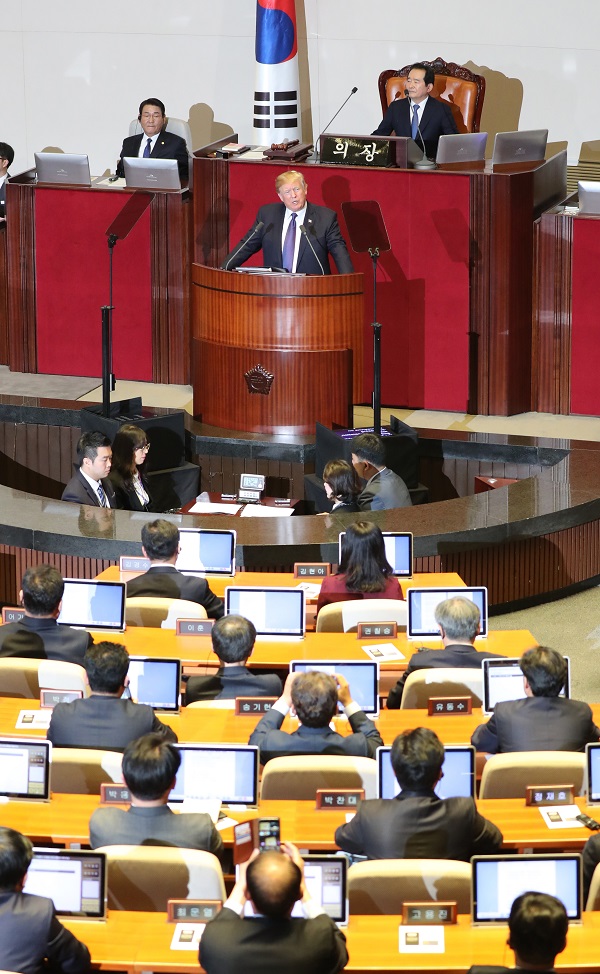 In unusually eloquent and restrained language, U.S. President Donald Trump issued a message to North Korean leader Kim Jong-un on Wednesday, offering the young dictator “a path to a much better future” in return for the ending nuclear and missile brinkmanship.

“The weapons you are acquiring are not making you safer. They are putting your regime in grave danger. Every step you take down this dark path increases the peril you face,” Trump said in a speech at the South Korean National Assembly, directly addressing Kim, who inherited power to rule the reclusive communist state in 2011. “North Korea is not the paradise your grandfather envisioned. It is a hell that no person deserves.”

“Yet, despite every crime you have committed against God and man, we are ready to offer, and we will do that – we will offer a path to a much better future,” Trump said. “It begins with an end to the aggression of your regime, a stop to your development of ballistic missiles, and complete, verifiable, and total denuclearization.”

“A sky-top view of this peninsula shows a nation of dazzling light in the South and a mass of impenetrable darkness in the North,” he continued. “We seek a future of light, prosperity, and peace. But we are only prepared to discuss this brighter path for North Korea if its leaders cease their threats and dismantle their nuclear program.”

North Korea’s rapidly advancing nuclear and missile capabilities are one of the key challenges for Trump. This year alone, the North conducted its sixth nuclear test and fired intercontinental ballistic missiles to expand its range to reach the U.S. mainland, prompting Trump to use his first UN speech in September to say “Rocket Man is on a suicide mission for himself.”

Although Trump devoted a significant part of the 35-minute speech to warn Kim not to test his resolve, his tone was muted compared to previous threats of “fire and fury.”

“Today, I hope I speak not only for our countries, but for all civilized nations, when I say to the North: Do not underestimate us, and do not try us,” Trump said. “We will defend our common security, our shared prosperity, and our sacred liberty.”

He said the United States previously gave diplomacy a chance, but the North continued to escalate tensions, declaring that his administration’s approach will be different. “The regime has interpreted America’s past restraint as weakness. This would be a fatal miscalculation,” Trump said. “This is a very different administration than the United States has had in the past.”

“I want peace through strength,” Trump also said, reminding the North that the three largest aircraft carriers in the world and nuclear submarines are stationed in the vicinity.

Trump also urged Pyongyang’s allies – Beijing and Moscow – to join efforts to isolate the regime. The request was made on the eve of upcoming summits with Chinese President Xi Jinping and Russian President Vladimir Putin.

“We call on every nation, including China and Russia, to fully implement UN Security Council resolutions, downgrade diplomatic relations with the regime, and sever all ties of trade and technology,” he said. “It is our responsibility and our duty to confront this danger together – because the longer we wait, the greater the danger grows, and the fewer the options become. And to those nations that choose to ignore this threat, or, worse still, to enable it, the weight of this crisis is on your conscience.”

Distinguishing the North Korean people from the regime that rules them, Trump condemned Pyongyang’s rights abuses in detail, while praising the South’s prosperity. He said the two Koreas were approximately equal in GDP per capita when the Korean War began in 1950, but the South’s economic is over 40 times larger than that of the North today. “Considering the misery wrought by the North Korean dictatorship, it is no surprise that it has been forced to take increasingly desperate measures to prevent its people from understanding this brutal contrast,” he said.

Trump also praised the Korea-U.S. alliance and assured that it will defend its ally. “We will not let the worst atrocities in history be repeated here, on this ground we fought and died so hard to secure,” he said. “That is why I have come here, to the heart of a free and flourishing Korea, with a message for the peace-loving nations of the world. The time for excuses is over. Now is the time for strength. If you want peace, you must stand strong at all times. The world cannot tolerate the menace of a rogue regime that threatens with nuclear devastation.”

Conspicuously missing was a mention of the bilateral trade issue Trump had earlier vowed to address during his trip here. Speculation had run high that he might use the National Assembly speech to encourage revisions to the bilateral free trade agreement or complain about the American trade deficits with Korea.

Trump, however, only said he and President Moon Jae-in had “productive discussions on increasing military cooperation and improving the trade relationship between our nations on the principle of fairness and reciprocity” during their summit on Tuesday.

During the speech, the audience gave him 22 rounds of applause including two standing ovations. Trump was accompanied by first lady Melania Trump. It was the first time in 24 years for an American president to give a speech at the National Assembly since President Bill Clinton in 1993.

Shortly after the speech, Trump headed to the National Cemetery and paid respect to fallen soldiers. He left for Beijing in the afternoon.