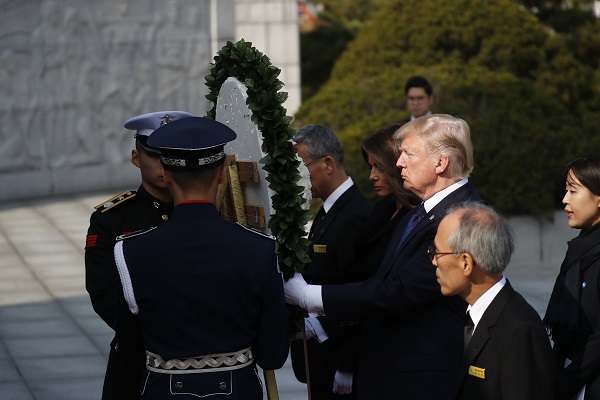 U.S. President Donald Trump and first lady Melania take part in a wreath-laying ceremony at the National Cemetery in Seoul on Wednesday. [AP/YONHAP]

A surprise visit by U.S. President Donald Trump to the demilitarized zone (DMZ) bordering North Korea was aborted at the last-minute due to heavy fog Wednesday morning.

Korean President Moon Jae-in was waiting for him at the DMZ, the heavily-armed narrow strip of land separating the two Koreas, in Paju, Gyeonggi, according to the Blue House Wednesday.

Moon proposed to Trump a trip to the DMZ the previous day during their bilateral summit in Seoul, according to a Blue House spokesman.
During their talks, Moon was said to have suggested to Trump that it would be good to visit the DMZ and see the situation there in person even if it meant “an adjustment to the schedule,” adding he would join the U.S. president if the visit came about. Trump accepted the proposal.

At around 7 a.m. Wednesday, Moon departed by Blue House helicopter. Moon’s helicopter had to land as it neared the inter-Korean border because of the fog, and he continued the rest of the trip to the DMZ by car.

But Trump, who was aboard presidential helicopter Marine One en route to the DMZ from Yongsan Garrison in central Seoul, was forced to turn back because of bad weather conditions. Moon eventually returned to the Blue House around 9 a.m.

“President Moon and President Trump showed great resolve to visit the DMZ despite difficult circumstances for the helicopter to land because of heavy fog,” said Park Soo-hyun, the Blue House spokesman, in a briefing Wednesday.

“President Trump, who had been waiting for the fog to lift, communicated every 10 minutes with President Moon,” according to Park, “conveying his intention to visit the DMZ” and “left nothing lacking in sending a strong message on the watertight Korea-U.S. alliance and the safeguarding of peace.”

While a trip to the DMZ was not on the schedule during Trump’s visit, he had publically predicted a “surprise.”
In late October, when asked if he would visit the DMZ, Trump responded, “Well, I’d rather not say but you’ll be surprised.”
But a White House senior official said last week the president would not visit the DMZ because “there is not enough time in the schedule,” adding such visits were “becoming a little bit of a cliché, frankly.”

Trump hinted again at a surprise Tuesday evening at a banquet at the Blue House. He said an "exciting day" was planned for Wednesday, "for many reasons that people will find out."

Trump arrived in South Korea on Tuesday, the second leg of a trip to Asia, and made his first stop at Camp Humphreys, the U.S. garrison located in Pyeongtaek, Gyeonggi. Moon made a surprise visit to Camp Humphreys to greet Trump on his arrival – the first time a Korean president greeted a visiting foreign leader outside the Blue House. Their joint visit to the DMZ on the one-year anniversary of Trump’s election would have marked the second surprise of the U.S. president’s trip to Korea.

Every U.S. president since Ronald Reagan in 1983 has visited the DMZ with the exception of George H.W. Bush.
There was anticipation that Trump may have delivered a message directly to North Korea if he had made it to the DMZ.

Later in the morning Trump delivered a message to North Korean leader Kim Jong-un in a speech to the South Korean National Assembly, stating: “We will offer a path to a much better future. It begins with an end to the aggression of your regime, a stop to your development of ballistic missiles, and complete, verifiable and total denuclearization.”

White House Press Secretary Sarah Huckabee Sanders was quoted by the Associated Press as telling reporters that the president was "pretty frustrated” he couldn't make the trip. "It was obviously something he wanted to do."

Despite Trump having to return, Blue House spokesman Park said, “Though aborted because of weather, the two leaders’ resolve to jointly visit the DMZ did not deter from encouraging the South Korean and U.S. Forces Korea’s troops’ efforts to maintain a sound and reliable defense posture based on the solid South Korea-U.S. cooperation despite North Korea’s nuclear and missile provocations.”