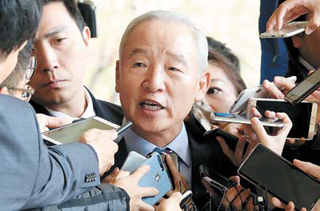 Prosecutors questioned a former chief of the National Intelligence Service Wednesday as part of a probe into allegations the spy agency offered bribes to former President Park Geun-hye’s aides.

Nam Jae-joon, who headed the NIS from 2013 to 2014, appeared as a suspect at the Seoul Central District Prosecutors’ Office around 1 p.m.

The former Army general is accused of playing a part in the agency’s allegedly illegal provision of 4 billion won ($3.6 million) to two presidential secretaries to the ousted leader between 2013 and mid-2016.

The aides, Ahn Bong-geun and Lee Jae-man, have been arrested over bribery charges. Prosecutors suspect the money from NIS coffers may have been channeled into Park’s secret fund.

“NIS agents are the last bastion and great warriors protecting this country’s liberal democracy,” he told reporters. He expressed regret that such efforts and sacrifices were being ignored and that NIS agents had become the subjects of investigation instead. Nam is also accused of obstructing a prosecution investigation in 2013 into massive political maneuvers led by the spy agency to prop up the past two conservative governments and their policies. Prosecutors have raided offices and residences of three former NIS chiefs, including Nam, who were in post under the previous two administrations. They plan to call in the two others for questioning soon, according to the prosecution.