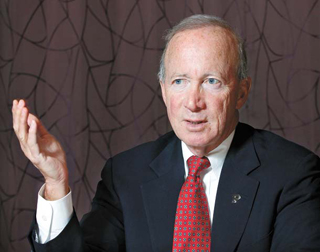 Seoul city government’s initiative to create start-up-friendly university environments is just what he would do if he were in control, said Mitchell Daniels, president of Indiana’s Purdue University and the state’s former governor.

“The great strength of the American economy over time has been its ability and its tendency to give birth to lots of small companies,” he told the Korea JoongAng Daily on Friday, “but one worrisome thing abut the current environment is that the rate of new company formation in the U.S. has slowed down and I hope that’s temporary.”

Daniels was in Seoul as part of his annual visit to Asia to meet with the alums of Purdue and bridge partnerships.

“I think this has always been the essence of a dynamic economy,” he said, “and if I were in a responsible position in Korea, I would be doing exactly the same thing.”

Purdue was ranked the top university in the Midwest for start-up creation by Milken Institute this year.

Seoul Metropolitan Government chose 13 universities this year for its Campus Town projects, and is providing some 5.1 billion won ($4.5 million) to build start-up-friendly facilities on campuses and rejuvenate areas near campuses through the year.

“There are some things to be careful about when government particularly gets in the act,” Daniels said. “The reason a free economy works so well to lift people out of poverty and into better lives is because it’s not controlled. Government’s record, as they say, of picking the winners is not good. I think the right approach, and I think this is what’s being done, is to create the environment, the ecosystem that is very friendly to new ideas, enterprises and partnerships that might help those enterprises get all the barriers out of the way, put in resources to help with legalities, business planning and mentoring the young company as it tries to grow but don’t think you’re smarter than the market.”

He added, “And my concern going home is, are we still doing that as we always have in America.”

But Daniels said he does not see eye-to-eye with the president on his initiative, which closely affects students at Purdue.

“We disagree with the changes in either DACA [Deferred Action for Childhood Arrivals, a U.S. immigration policy that allowed immigrants who came into the country as minors to request deferred action for two years or more] or anything that limits the opportunity of international talent to come to the United States either to study or work or both,” he said.

“There are very legitimate questions about our overall immigration policy in the U.S.,” he added, “and there are things about it that I think are not well-advised. But I hope that if change comes, it will not only preserve but strengthen the opportunity for international talent to come and study and work and invent in America.”

“International students studying in the U.S. has become a phenomenon in the last couple decades, but it’s not new at Purdue,” Daniels said. “For a century or more, students especially from Asia have been finding their way to Purdue to study. So we have thousands of alums, a couple of thousands in Korea and even more in China and India.

“A majority of our Asian students are in engineering and natural sciences and computer science,” he added. “Purdue had the first computer science department anywhere, around 54 years ago. It was the first school to say this is going to be an important and new phenomenon and we should organize ourselves to prepare people for it.”

And the president intends to grow the university to be a pioneering academic institute in line with the speed of the fourth industrial revolution.

“Here is another reason it’s interesting to be at Purdue,” he said. “As I say to my students, you’re going to invent, and some of them are already inventing, these new tools which are great for society and customer but they’re going to displace somebody who is currently providing that good or service in a less advanced way. So I hope somebody else here is busy inventing something that will give those folks an equivalent opportunity. It’s fascinating to be at one of the world’s centers of technologies which are both a blessing but also a concern.”

When asked if he has any plans to run for office ever again, he dismissed the possibility.

“I hope to be a contributing citizen but not again in public office,” he said. “I told the people of Indiana from the outset that governor was the only job I ever intended to run for and I am determined to honor that pledge.”