Los Angeles Dodgers’ left-hander Ryu Hyun-jin said Wednesday he was pleased with the way he stayed healthy through his bounceback season in the majors. 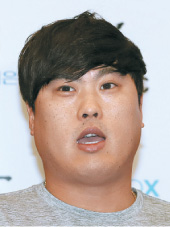 The 30-year-old pitched his first full season since 2014. His 2015 season was wiped out after a shoulder operation. Ryu then made one start in July 2016 before shutting down with elbow issues.

He was 5-9 with a 3.77 ERA in 25 appearances, including one game out of the bullpen. He picked up his first career save on May 25, thanks to four shutout innings against the St. Louis Cardinals.

“I didn’t have any arm issues from start to finish,” Ryu told reporters at Incheon International Airport after arriving home for offseason training. “As far as my health, I’d give myself 100 points.”

Ryu’s performance was a slightly different story. He remained on the bubble on the deep Dodgers’ rotation all season, and was the odd-man out throughout the postseason as the Dodgers opted for a four-man rotation of Clayton Kershaw, Rich Hill, Yu Darvish and Alex Wood.

Kenta Maeda, who also bounced between the rotation and the bullpen during the regular season, moved to the pen for the Dodgers’ run to the World Series.

Ryu, on the other hand, wasn’t a bullpen option for the Dodgers. Following his shoulder surgery, Ryu now requires a lengthy pregame routine to get ready, and he wouldn’t have been able to do that as a reliever.

In an up-and-down year, Ryu enjoyed a much better second half than first half. He was 3-6 with a 4.21 ERA at the break, but went 2-3 with a 3.17 ERA in the latter half. At one point, Ryu boasted the best second-half ERA on the Dodgers.

But he cost himself a chance to make the postseason rotation with some shaky outings in September. He was 0-2 with a 4.20 ERA over his final four starts, during which he gave up three home runs in 15 innings.

Ryu admitted he was disappointed with not getting a chance to pitch in the World Series, where the Dodgers lost to the Houston Astros, but he didn’t want to dwell on the past.

“Other [starting] pitchers just did so well, and I have to accept that,” he said. “Next year is going to be important for me.”

“I will try to make sure I will be able to stay healthy next year, too,” Ryu said. “I hope I can put up the kind of numbers I had earlier in my career.”