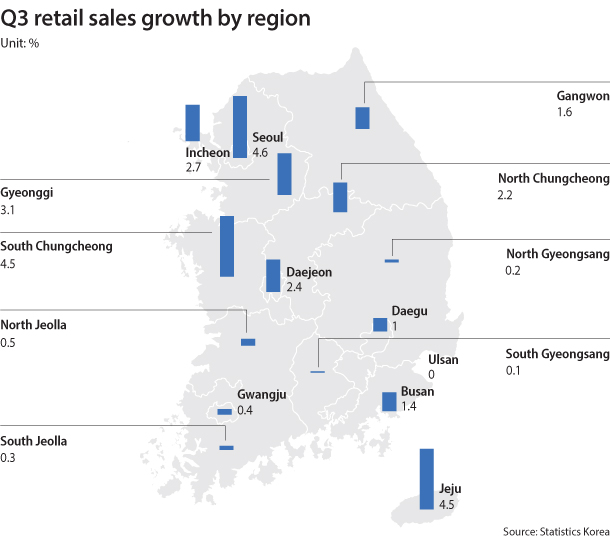 The retail and service sectors rebounded in the third quarter, the latest sign that the Korean economy may be heading toward stronger growth this year.

Retailers and service providers in nearly every region in the country saw their sales revenue increase compared to a year ago, according to the latest figures released Thursday by Statistics Korea. The only exception was Ulsan, where retail sales remained stagnant, though revenue in other service industries increased 1.7 percent.

Domestic consumption had been experiencing decline every quarter since July 2016, affected by the political turmoil that resulted in the impeachment of President Park Geun-hye and restructuring in various heavy industries.

Ulsan, in particular, was hit hard. Once the anchor of Korea’s thriving shipbuilding industry, the city has fallen on hard times as the number of vessel orders has been declining and competition from global shipbuilders has intensified. The industry has been in the middle of restructuring since last year, with companies cutting costs and putting workers on leave. The slowdown as a result has touched the city’s retail and service sectors.

On the other hand, Seoul saw the sharpest increase in sales, 4.6 percent, followed by Jeju and South Chungcheong each with 4.5 percent. These are areas in which major discount chains like Lotte Mart and Emart have been expanding significantly. Seoul alone saw sales at discount chains surge nearly 19 percent, while sales at supermarkets and convenience stores rose 1.6 percent in the third quarter.

Department stores, on the other hand, struggled with a sales drop of nearly 5 percent.

Other service sectors saw revenue growth, including real estate (14 percent), finance (4 percent), and broadcast, telecommunications and publishing (6 percent). Service-sector revenue in Seoul grew 4.1 percent, the sharpest in a year since 3.9 percent during the third quarter of 2016.

Jeju, which remains one of the country’s most popular tourist destinations, also saw retail sales improve. Sales at discount chains, including their duty-free stores, increased 1 percent, a turnaround from the 12 percent decline in the second quarter that was largely caused by a drop in tourists from China.

In March, the Chinese government banned tour groups from visiting South Korea in response to Seoul’s acquiescence to the U.S. military’s installation of a missile shield that Beijing believes threatens its security interests.

“Although the number of Chinese tourists continued to drop [in the third quarter], duty-free sales partly recovered thanks to an increase in Japanese and Korean tourists,” said Sohn Eun-rak, the service industry division director at the statistics agency.

As a result, revenue in Jeju’s service sector rose 3.6 percent.

But it was South Chungcheong that saw the sharpest growth in the service sector with nearly 5 percent, contributed by an influx of people moving to Sejong. The city, which is newly built and hosts several government offices, saw its population increase nearly 15 percent in the third quarter this year from last year.

With domestic consumption improving and exports going strong, the Bank of Korea last month raised its outlook for economic growth this year to 3 percent.