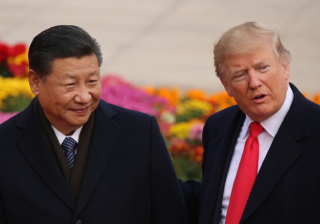 Analysis in Korea, the United States and Japan shows the golden period for resolving the North Korean nuclear crisis may be approaching. A major breakthrough in the stalled North Korean nuclear tension of the past two decades is likely to be made this time. Minister of Unification Cho Myoung-gyon mentioned a specific time frame in a recent press conference — from U.S. President Donald Trump’s Asia tour to next spring will be a very important time.

The first requirement for the golden period is the unprecedented will to resolve the tension by the Trump administration. In the National Assembly address on Nov. 8, President Trump said, “The regime has interpreted America’s past restraint as weakness. This would be a fatal miscalculation.” He warned, “This is a very different administration than the United States has had in the past … Do not underestimate us. And do not try us.” He would not repeat the situation that Otto von Bismarck, the 19th century German statesman who unified the German states, described as “the strong losing power due to reluctance and the weak becoming stronger through boldness.”

The other requirement for the golden period is Chinese president Xi Jinping. Xi has successfully secured his position and would like to attain results through cooperation with the United States.

The U.S.-China summit on Nov. 9 will be a historic meeting determining the fate of the Korean Peninsula as the two leaders’ wills interlock. Depending on how the meeting goes, a joint operation of the United States and China to bring North Korea to denuclearization talks may begin. The two leaders may draw a rough sketch for strategic compromise such as former Secretary of State Henry Kissinger’s proposal of exchanging the collapse of the Kim Jong-un regime and denuclearization with the withdrawal of U.S. Forces in Korea.

President Moon Jae-in made Trump say that there is no “skipping” Korea during his visit. At the Korea-China summit on Nov. 11 and the upcoming visit to China within the year, Moon needs to find out Beijing’s intentions. The window is about to open.

*The author is a deputy editor of JoongAng Sunday.