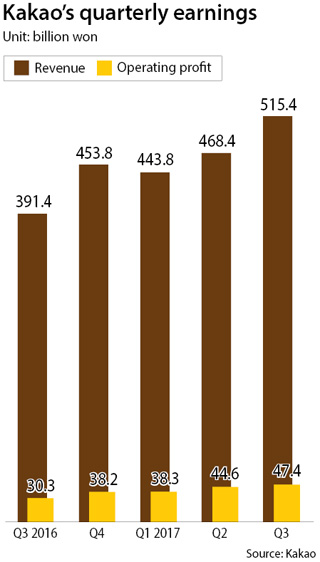 The Jeju-based company also reported record operating profits of 47.4 billion won during the July-September period, 57 percent higher than a year earlier. The previous record was hit in the first quarter of 2015.

Content made up 50.7 percent of all revenues. Content revenue increased 32 percent year on year to total 261.4 billion won. Of the content revenues, music file downloads and streaming service MelOn produced 122.1 billion won in revenues, an increase of 28 percent on year, and revenue from online games - including its popular Black Desert Online and the launch of Onmyoji for Kakao during the third quarter - stood at 93.9 billion won, up 20 from the same period a year earlier.

Revenue from other content platforms including Kakao Page, a social network linked to the KakaoTalk app, rose 87 percent on year to total 45.5 billion won. Kakao Page’s daily revenue rose to 500 million won, and one fifth of that revenue comes from the company’s Japanese operation, whose webtoon service has been gaining traction, the company said. Revenue from advertising accounted for close to 30 percent of total revenue at 151.5 billion won, up 19 percent on year.

Kakao has yet to earn profits from its mobility business, which includes Kakao Taxi, a taxi-hailing app. During a conference call, Choi Yong-suk, head of investor relations, said the company has high hopes for a taxi hailing service targeting corporate customers.

“Five to 10 percent of all taxis running on the roads are used by corporate clients, our analysis has shown,” he said. “We plan to give those companies a payment and budget management system for our service in return for commission fees.”

He added that Kakao is studying other ways to make profits from its mobility businesses.

Kakao’s artificial intelligence platform is expected to bear some fruit next year too. Kakao plans to make Kakao I, its AI system, available to businesses of all sizes. The open platform has already been deployed in vehicle infotainment systems, apartments and consumer electronics. PlayerUnknown’s Battlegrounds, a blockbuster hit game, will begin service on Nov. 14 through Kakao Games, the company’s game subsidiary.

Expectations are also high for a new advertising platform that goes into Beta testing on Nov. 20. Called Moment Circle, the platform is tied to KakaoTalk, a chat app that is used by nearly 90 percent of Korea’s smartphone users.

Targeted advertising for KakaoTalk users has been designed to be linked to Shopping Plus, another new e-commerce platform, so the advertisements could directly lead to purchases.

Raising its target price for Kakao shares from 130,000 won to 190,000 won, Moon Ji-hyun, an analyst with Mirae Asset Daewoo Securities, said on Monday the new platforms would boost advertising revenues for Kakao. Shares of the company ended 3.17 percent lower at 152,500 won on Thursday.