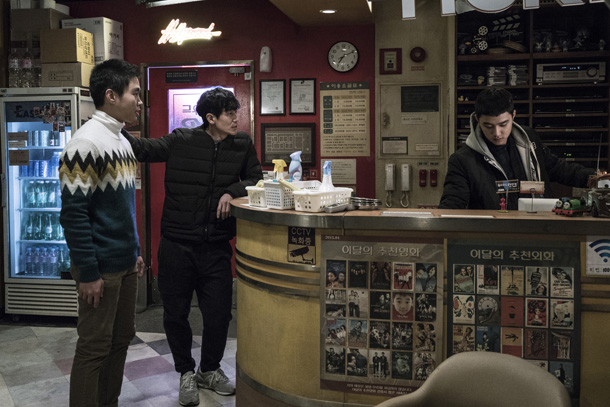 “Room No. 7” is a black comedy, starring Shin Ha-kyun and Do Kyung-soo, centering on two men struggling to solve their own problems. [LOTTE ENTERTAINMENT]

“Room No. 7,” which arrives in theaters next week, is a rare black comedy produced in Korea.

The film, which opened the 21st Bucheon International Fantastic Film Festival in July, touches on the dark realities of two men from different generations, who each struggle to escape from the troubles they were forced into in order to solve their financial problems.

Starring actors Shin Ha-kyun and Do Kyung-soo, better known as D.O. from K-pop group Exo, the film centers on the owner of a failing DVD room (where people can rent a DVD to watch) named Du-sik, played by Shin, and his money-strapped part-timer named Tae-jeong (Do), who hasn’t been able to get paid for months. Due to the store’s poor performance in the high-priced Apgujeong-dong in southern Seoul, Du-sik tries to sell off the store, but to no avail.

After Du-sik hires a Korean-Chinese part-timer named Han-uk (Kim Dong-yeong), everything starts to change, and the two main characters are put into a series of nerve-racking situations.

“Though seven means luck, I believed [the digit] also entails misfortune,” said director Lee Yong-seung, who also made “10 Minutes” (2014), explaining his motive for placing the digit in the title during the film’s press event Tuesday.

The relatable story drew Shin to the film.

“I decided to take part in the movie because I thought it was an interesting story based on reality,” said Shin. The actor said the story of the two main characters standing on the edge of survival in the seemingly unchangeable social system touched his heart.

Do hoped to show a different side of himself in “Room No. 7.”

“I found the script interesting and it was a black comedy, a genre I like. Through the character Tae-jeong, I thought I would be able to showcase a different aspect of myself,” the actor said.

The movie arrives in theaters on Nov. 15, and is rated 15 and above.