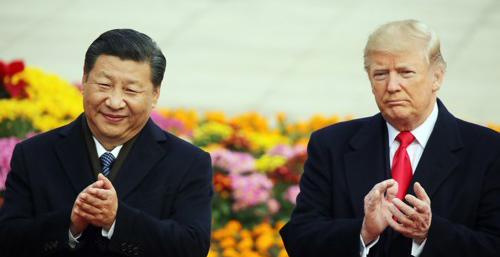 The remarks were aimed at satisfying Trump, who, standing beside Xi in the Great Hall of the People, was using the third leg of a five-nation trip in Asia to put greater pressure on Pyongyang.

A U.S. senior government official told reporters on Air Force One en route to Beijing Wednesday that one of Trump’s main agendas with Xi would be to pressure China into identifying financial links between his country and North Korea, and put them to an end.

China accounts for more than 90 percent of North Korea’s foreign trade and is believed to be the only nation in the world able to cripple the regime’s economy.

“We committed to denuclearization and nonproliferation” in regards to North Korea, Xi said through an interpreter Thursday.

“Both sides will strictly implement the sanctions of the UN Security Council and will find a solution through peaceful communication and consultation and find a way for long-term stability on the Korean Peninsula.”

“We agreed not to replicate failed approaches of the past, and there were many,” said Trump. “All responsible nations must join together to stop arming and financing and even trading with the murderous North Korean regime.”

The United States and China, he underscored, have it in their power to “finally liberate this region and the world from this very serious nuclear menace.”

The U.S. official who earlier spoke on Air Force One told journalists China was doing “much more than it’s ever done in the past,” but that it wasn’t time for “complacency” or for allowing people to “slip through loopholes.”

So far, the official continued, North Korea was showing no signs of yielding to pressure to give up its nuclear arsenal.

“We’ll certainly know it when we see it, and we’re not even catching a whiff of it right now.”

Whether North Korea will be returned to Washington’s state sponsors of terrorism list will be decided towards the end of Trump’s 12-day tour of Asia, around Nov. 14, the official said.