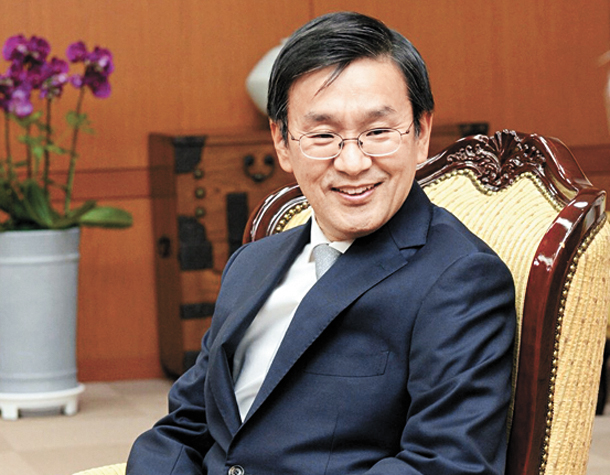 Paik Jin-hyun will be president of the International Tribunal for the Law of the Sea until 2020. [MINISTRY OF FOREIGN AFFAIRS]

The first Korean to ever hold the title of president of the International Tribunal for the Law of the Sea (Itlos), Paik Jin-hyun, professor of international law at Seoul National University Graduate School of International Studies, was elected by secret ballot on Oct. 2.

Composed of 21 judges, Itlos is recognized as one of three international judicial bodies and has jurisdiction over any dispute concerning the interpretation or application of the United Nations Convention on the Law of the Sea, which includes the regulation of all ocean space, its uses and resources. While Itlos judges are elected for nine-year terms, the president is elected for three years.

“Power is not the only factor influencing international relations,” said Paik. “For middle powers like Korea, we must use international law as a measure to protect our national interest.”

He added that the role of the law is becoming more prominent with increased complications in international relations.

“Because the sea lies between South Korean borders and [most of] our neighboring countries, we are a powerful marine and fishery nation,” claimed Paik. “That is why the sea and maritime law is important to Korea.”

The newly-elected Itlos president had an interview with JoongAng Ilbo on Oct.26, discussing the impact of Itlos rulings on sovereign states, and the role of international law in South Korea.

Q. What kind of impact do Itlos decisions have?

A. Itlos handles all international maritime disputes and its decisions are final and binding. Up until now, there have been 25 rulings made by the judicial body and they take precedence in the negotiations of many nations. Therefore, if officials do not research the impact of the rulings for their respective nations, they will be at a disadvantage.

Could you give an example of a precedent?

Last year, an arbitral tribunal [constituted under Annex VII to the UN Convention on the Law of the Sea] convened when China and the Philippines had disputes regarding the South China Sea. The central issue was whether certain maritime features in the Sea, claimed by both China and the Philippines, are properly characterized as rocks or islands. If these features are identified as islands they could generate an exclusive economic zone or entitlement to a continental shelf [extending up to 200 nautical miles. An exclusive economic zone grants special rights to the exploration and use of marine resources in that zone under the UN Convention on the Law of the Sea.] The arbitral tribunal, however, recognized the features as rocks [meaning states would only be capable of generating a territorial sea no greater than 12 nautical miles]. If we uphold the standard the arbitral tribunal used in their decision, many islands may be recognized, instead, as rocks. Therefore, the court’s decision has important [legal] implications.

If Korea builds facilities on the Dokdo islets, can Japan sue Korea with the same precedent laid out by the South China Sea dispute [mentioned above]?

It is difficult to respond directly regarding that specific issue. The court, however, has recently been approaching disputes in a progressive and active manner.

Doesn’t international law ultimately only give advantage to powerful nations?

That is not true. In international relations, a country with a strong military, economy and diplomatic relations has the upper hand, but because the law is universal and objective, it is impartial towards every country. The increase in complications [arising from international disputes] is also enhancing the law’s role. Recently, smaller countries have been filing petitions on more powerful nations, putting powerful nations more on the defense. Even if a country is small and relatively powerless, they can resolve the injustices they face or have undergone through international law.

It has been pointed out that there is a decrease in students specializing in international law. How do you feel about this?

I am very concerned. When we face complicated geopolitical issues, it is difficult to keep the peace and autonomy of our nation through our powers alone. We need to protect our national interests by convincing our counterparts through international law. Although it is a challenging path, it is a rewarding method that will protect the sovereignty and interest of our nation.

Paik ended the interview by urging the Korean government to take more initiative in encouraging students to specialize in international law.