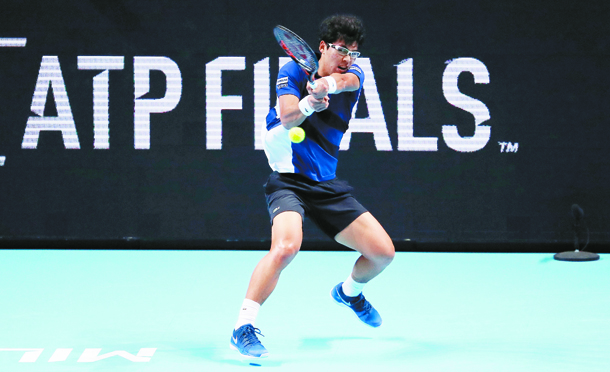 Chung Hyeon returns the ball to Andrey Rublev of Russia during the Next Generation ATP Finals in Milan, Italy on Saturday. [AP/YONHAP]

Chung Hyeon, 54th in the world, has won an ATP Tour event by defeating Andrey Rublev, ranked 37th, 3-1 at the inaugural Next Generation ATP Finals in Milan on Saturday. 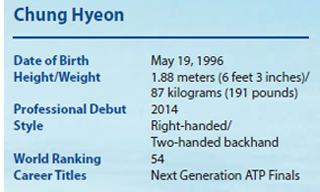 This is Chung’s first ATP Tour victory, making him the first Korean tennis player since Lee Hyung-taik at the Adidas International Tour in January 2003 to win an ATP Tour event. Chung won a purse of $390,000.

“I’m just really, really happy, because, I don’t know, I really don’t know how I won here in Milan,” Chung was quoted as saying on the ATP World Tour website. “It was a really tough match tonight against Rublev. He was better than the last time. So I was just trying to play my best.”

Chung got off to a slow start by giving away the first set, but as Rublev started making unforced errors, Chung tied the match 1-1 and ultimately won the second set.

“I was playing much better than him,” Rublev was quoted as saying. “I was dictating the match, and then just because I let my emotions go everything changed, because Chung, he was always there. He was always focused. He was always in the match. No matter if something went wrong, he was still fighting.”

Chung won the third and, after a long rally in the fourth, he won the deciding deuce point to win the event.

After winning a gold medal in the men’s doubles competition at the 2014 Asian Games, Chung won ATP’s Most Improved Player award in 2015, as his world ranking moved up more than 120 places from the start to the end of the season.

Though Chung started the 2016 season in 51st, his ranking dropped outside of 100, but under a new coach, he is now having the best season of his career, reaching his personal highest world ranking of 44th in September and achieving his best grand slam result by reaching the third round at the French Open.

In addition, Chung achieved his goal of “winning an ATP Tour event,” which he announced at the beginning of the season that he was aiming for.

The Next Generation ATP Finals will feature the top seven players in the Emirates ATP Race to Milan and a wild card were eligible to compete.

Only players under 21 were qualified to play.

Though the tournament does not have ranking points, it is an official ATP Tour event.

The format was played in two round robin groups, the semi-finals and the final.

The public was allowed to move around during the match and coaches were allowed to talk to players a limited number of times. Rather than the usual six games, matches were played in best-of-five sets and first-to-win-four-games sets.

Also, while at 40-40, a player who won the next point automatically won the set, and serves had to be made 25 seconds after.