After playing in 87 professional tournaments, Ji Han-sol captured her first KLPGA Tour title on Sunday at the ADT CAPS Championship in Icheon, Gyeonggi. 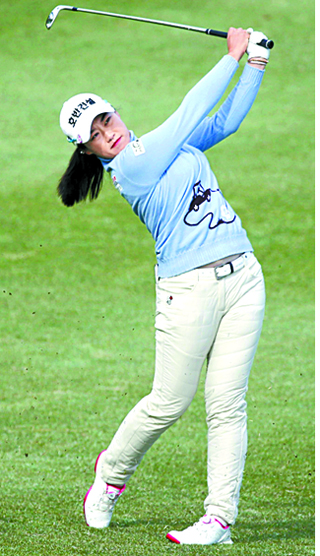 Ji Han-sol watches her shot during the final round of ADT CAPS Championship 2017 at South Springs Country Club in Icheon, Gyeonggi on Sunday. [NEWS1]

The defending champion, Cho, made seven birdies in the final round to finish runner up, but it wasn’t enough to overcome Ji’s three-shot lead. Ji had the best week of the season, with 100 percent in par saves, hitting 94.4 percent of greens with 29 average putts.

“I was nervous in the last four holes, but since my shots were good, I was confident in my playing,” Ji said. “This season was really tough, but I’m really happy to win the season’s last tournament and I’m excited for next year.”

Before Ji’s professional debut, the 22-year-old was already a famous name among Korean golfers, as she played for the Korean national team and left quite an impression in KLPGA Tour events, which she played under invitation.

However, despite such high expectations, Ji spent her first two seasons without a victory. Since Ji’s KLPGA Tour debut in 2015, she had three runner-up finishes - the 2015 Doosan Match Play Championship, 2016 Dalat 1200 Ladies Championship and the 2016 World Ladies Championship. And this season, prior to her victory, Ji’s best finish was third place at the Kyochon Honey Ladies Open in May. With a victory, Kim won a purse of 100 million won ($892) and ended the season 19th in the prize money ranking.

Despite being tied for 49th, Lee Jeong-eun has won the KLPGA Tour’s lowest scoring average, the KLPGA point standing, the most number of wins and the season prize money. Lee became the eighth player in KLPGA Tour history to win four categories in a single season.

Though this is only Lee’s second season on the tour, she has won all five awards, as she won the Rookie of the Year award last year. Throughout Lee’s four victories, she didn’t miss a cut in any of the events and recorded top ten finishes in 20 of the 27 tournaments.

And by finishing tied for ninth, Jang Eun-soo has been finalized as the winner of the 2017 Rookie of the Year award, earning a total of 1,796 rookie points. Jang didn’t win any tournaments, but recorded seven top-10 finishes.

“Since I made a professional debut, I wanted to win the rookie of the year award because you can only win it once throughout your career,” Jang said.

Though Park Min-ji was dominant in the Rookie of the Year standing after her victory at the Samchunli Together Open 2017, the second tournament of the season, Jang played in all 28 tournaments this season and finished 182 points ahead of Park.

Jang being named the Rookie of the Year makes this the third consecutive season for the KLPGA Tour where someone has won the award without winning a tournament.