Korea will try to continue their winning momentum when they face Serbia this week at home in a friendly football match. 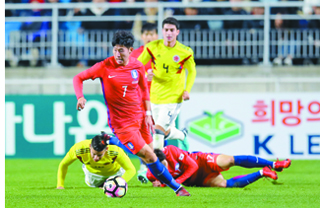 Son Heung-min, second from left in red, dribbles the ball during a friendly match against Colombia at Suwon World Cup Stadium in Suwon, Gyeonggi on Friday. [YONHAP]

Korea, No. 62 in the latest FIFA rankings, will host 38th ranked Serbia at Munsu Football Stadium in Ulsan on Tuesday. This will be Korea’s last home match in 2017.

Both Korea and Serbia have already secured their tickets to the 2018 FIFA World Cup. Korea managed to grab one of the four automatic qualifying berths available in Asia, while Serbia topped Group D in the European qualifying campaign.

The two teams are coming off a sweet victory. Korea ended their six-game winless streak on Friday after beating Colombia 2-1 at home, while Serbia blanked China 2-0 in Guangzhou on the same day.

Korea and Serbia have faced each other twice before. Their first meeting in London ended with a 1-0 win for Serbia, but Korea got revenge with a 2-1 victory at home in 2011. Korea also had a 2-0 victory in 2005, but that’s when the opponents were known as Serbia and Montenegro.

Four players - Ki Sung-yueng, Kim Young-gwon, Lee Keun-ho and Koo Ja-cheol - from the current Korean squad have played against Serbia in the 2011 friendly. Kim was also one of the goal scorers in that match. The national team assistant coach Cha Du-ri, meanwhile, played as a right back at that time.

Among Serbian players, only Ivan Obradovic has faced Koreans at Seoul World Cup Stadium in Seoul.

Korea will try to collect consecutive wins for the first time since November 2016, when they edged out Canada and Uzbekistan in order.

Head coach Shin Tae-yong made a turnaround with a win over Colombia, which was also his first victory with the men’s senior team since he took over the helm in July. Until Friday’s match, he was in hot water for poor national team performance.

Against Colombia, Shin deployed Tottenham Hotspur star Son Heung-min as center forward in a 4-4-2 system, and used hardworking defender Go Yo-han in the midfield, which turned out to be a big success.

Son scored twice - his first multi-goal performance for Korea since 2015 - while Go successfully executed his job of man-marking Colombian attacking ace James Rodriguez throughout the match.

It’s uncertain whether Shin would use same tactic against the Serbians, who are considered more powerful and physical than Colombia. But Shin had promised he would at least not make the same defensive performance as last month when they conceded seven goals against Russia and Morocco.

Serbia will have their second match under caretaker Mladen Krstajic, who took the job after Slavoljub Muslin was sacked last week despite leading the country to qualify for the 2018 World Cup.

Serbia dropped four players - Aleksandar Kolarov, Dusan Tadic, Filip Kostic and Dusko Tosic - from their squad after the match against China, when Krstajic decided to give them a rest. To fill their void, Serbia called up three players from the domestic league. While other stars like Nemanja Matic of Manchester United and Matija Nastasic of Schalke 04 didn’t even travel to Asia in the first place, Serbia still have big name players on their squad.

Korean attackers will first have to challenge Serbia’s defense that is led by former Chelsea man Branislav Ivanovic. The 33-year-old veteran, now with Russia’s Zenit St. Petersburg, started as center back and was team captain against China.

Villarreal right back Antonio Rukavina is also an experienced player who can give stern test to Korea. Anderlecht left back Obradovic is also expected to start since the former Manchester City player known for his powerful kicks is absent.

In midfield, Nemanja Gudelj is familiar with Asian football as he plays for the Chinese club Tianjin Teda, while Sergej Milinkovic-Savic is a rising star from Italian outfit Lazio.

Korean defenders should be aware of skillful attacker Adem Ljajic and Andrija Zivkovic as well as Serbia’s targetman Alexandar Mitrovic. Ljajic, who plays for Torino, and Mitrovic, a striker with Newcastle United, were goal scorers against China.