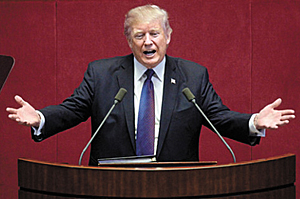 When U.S. President Donald Trump took the podium at the National Assembly on Wednesday, there were expectations and concerns. Expectations were about a reassurance from the U.S. president that the United States will defend South Korea from any provocation by the North with extended deterrences, including the nuclear umbrella. Concerns were about unnecessarily provoking the North with cruel words, as he had done in his UN Assembly speech in September, in which he threatened to “totally destroy” the North and called Kim Jong-un a “little rocket man.”

While Trump’s National Assembly speech almost satisfied the expectations, it was confirmed that the concerns were unnecessary. Trump studied the development of the South and the brutal reality of the North Korean people far beyond our anticipation. While visiting Seoul, Trump was a different man who had communicated with his supporters impulsively through Twitter and attacked liberal media as fake news producers. He gave a vivid explanation about the reality of the North based on the facts offered by intelligence analysts. Ironically, many South Koreans came to learn about the painful lives of the North Korean people through the explanation of the president of an ally.

The contents of the speech were as great as its format. Would it be too much to say that the speech reminded one of the historic “Iron Curtain” speech by Winston Churchill? When he received an honorary doctoral degree from Westminster College in Missouri in March 1946, he gave the famous “Sinews of Peace” speech. “From Stettin in the Baltic to Trieste in the Adriatic, an iron curtain has descended across the Continent,” he said, and the ominous prediction was realized. The post-war Europe was separated by the iron curtain between Eastern and Western Europe.

If Churchill’s prediction was astonishing, Trump’s understanding of the security situation in front of him exceeded the general perception.

Trump’s speech may have not been a match of Churchill, but he managed to demonstrate the potential to become a statesman of the world from his former status as an obscure politician of the United States who promotes an “America First” policy.

The theme was “peace through strength.” Citing the massive deployment of U.S. strategic assets to the Korean Peninsula, Trump said we must stay strong if we want peace. “And we will not let the worst atrocities in history be repeated here, on this ground, we fought and died so hard to secure,” he said. The promise was what we have long desired amid the worsening security crisis.

“Peace through strength” can be titled the Trump doctrine. It was remarkable for Trump to say forthright that the United States will respect the mutual defense treaty even if the North miniaturizes nuclear warheads and operationally deploys intercontinental ballistic missiles capable of reaching the U.S. mainland. Americans were surprised by Trump’s speech. It will be remembered as the best speech a U.S. president gave here.

In his speech, Trump mentioned Kim Jong-un by name only once. But he demonstrated ample knowledge and intelligence regarding the North. While avoiding cruel language, Trump issued a series of stern warnings to the North, backed by strength. And yet, Trump made clear that the demonstrations of force by the United States and its allies and deployment of strategic assets were not for war but to force the North to negotiate. Such a stance clearly supports President Moon Jae-in’s clear view, conveyed to Trump, that there should never be a preemptive strike on the North without the South’s consent.

Trump once said state secretary Rex Tillerson’s efforts to find a diplomatic resolution to the North’s nuclear and missile issues were a waste of time. But even Defense Secretary James Mattis supports Tillerson’s peaceful approach. Some members of the House of Representatives are even discussing a bill to prohibit a preemptive strike on the North.

Trump knows the apocalyptic consequence of a preemptive strike. That was why he issued a stern warning to Kim at the National Assembly in calm but powerful language. He had planned to visit the demilitarized zone with Moon in order to add more weight to his warning.

Since launching a mid-range ballistic missile on Sept. 15, Kim is keeping a low profile, refraining from staging any further provocations. U.S-China and Korea-China summits should produce creative measures to get Kim to talk.

Trump said he and Chinese President Xi Jinping agreed during their summit in Beijing on Thursday that the two countries will work together to stop the North from walking further down its reckless path. Kim must take seriously Trump’s warning and the agreement between Trump and Xi. We also hope Trump won’t go back to his impulsive Twittering after he returns home from Asia.