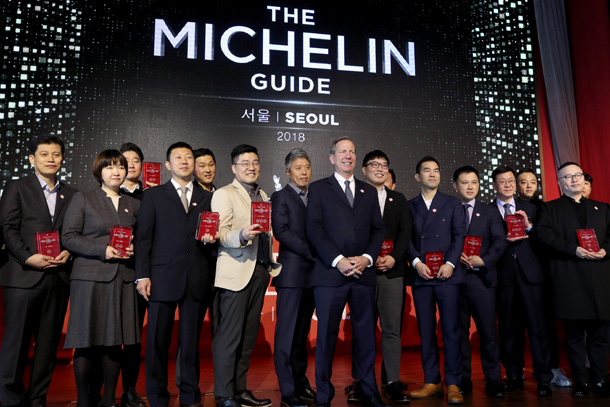 The chefs that were awarded stars in The Michelin Guide Seoul 2018 gather for a photo after the announcement ceremony at Signiel Seoul in Jamsil, southern Seoul. [YONHAP]

I hope the Michelin Guide’s inspectors never find out about this restaurant serving home-cooked food in an underground arcade in Jung District, central Seoul. It didn’t make the second edition of the Michelin Guide Seoul published on Nov. 8, but as a regular, I am thankful.

The 5,000-won ($4.45) egg custard that the shabby restaurant serves is as fluffy as a soufflé prepared at a starred French restaurant. It is one of my top 10 pleasures of living in Korea to enjoy its acorn jelly and spicy dried radish.

I want nothing more in the world when I eat there, served with side dishes that change daily. Japanese writer Haruki Murakami wrote in his essay about his regular diner that it was very hard to describe in writing how tasty the croquet set is. I feel the same for the egg custard here.

I would want to go to this restaurant every day, but I can’t because of the atmosphere created by the other customers. Some cannot wait in line, yell when ordering and still complain about the service. The few loud customers have an overwhelming presence.

Some say customers are kings, but kings should have royal etiquette. The ill-mannered customers have long been a nuisance in the fine dining industry. Some make reservations and don’t show up. A chef said that his restaurant had a deficit because of “no-shows” in the high season like Christmas.

In the second year that Michelin Guide Seoul has been published, the city is clearly establishing itself on the global gastronomy map. But what if you give stars to the cultural level of the customers enjoying the food?

Chef Pierre Gagnaire, who is considered the “Picasso of French cuisine,” visited Korea in 2008. After an interview at a Korean restaurant, he walked into the kitchen even though his assistant advised him that they didn’t have time.

He took the hands of the chef and said that he was grateful for the wonderful experience. It was a horizontal relationship between the provider and recipient of a cultural experience, not a vertical relationship over money.

Gastronomy is not just a meal but an experience of all five senses, and the level of the customers as the entity enjoying the experience is important. Rather than obsessing over how many restaurants earned stars in Seoul, we may need to reconsider the culture of the customers.

*The author is a reporter at Monthly JoongAng.