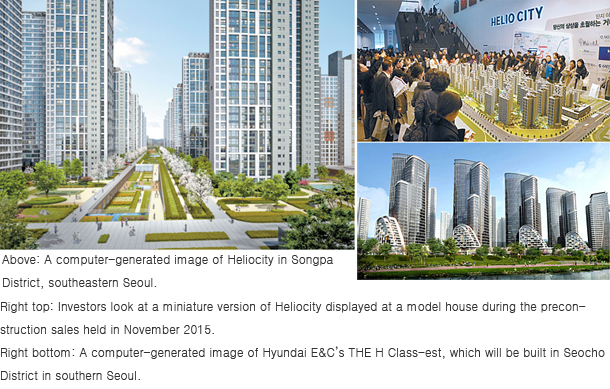 Ever heard of Heliocity? It may sound like the title of a sci-fi film or a video game, but it’s actually the name of an apartment complex that is being built near Garak Market in Songpa, southern Seoul.

While the apartment complex is well-known for its huge size, with 9,510 units, and a corruption scandal that led to the arrest of members of the reconstruction committee on bribery charges, it is the new name that is causing concern among residents.

The apartment complex, originally Garak Siyong Apartments, is being reconstructed by a construction consortium led by Hyundai Development Company (HDC).

The new name, a portmanteau of “helio” and “city” that is meant to show the apartment complex is a city of lights, is part of the reconstruction process. But some apartment owners have been demanding HDC change the name because it sounds more like “hell city.”

The apartment owners are planning to hold a general meeting next month where they will vote on the name.

The other options on the table include Ovitze City, ADELION and Bellawoods.

“Until residents start moving in, in December 2018, the name of the apartment complex can change anytime,” said an official on the reconstruction committee.

Heliocity isn’t the only apartment complex with a controversial name. In fact, other major reconstruction projects in Gangnam, southern Seoul, are also getting odd names, which are a mixture of broken English and sometimes even signs and symbols.

The goal is to emphasize the prestige and characteristics of the apartments.

Hyundai E&C in September won a bid to redevelop Banpo Jugong 1 Danji in Seocho-dong, where construction costs alone are estimated to be worth 1 trillion won ($892.6 million). However, the name of the newly built apartment will be “THE H Class+est”

“THE H” is the construction company’s premium brand. By adding “+est” to “Class,” the company intended to create a superlative adjective. Unfortunately “Class+est” sounds more like “classist” - a prejudice based on class - than the intended “classiest.”

“It’s ‘Konglish’ [or Korean English] that’s not fit for a high-end apartment whose presale price is likely to reach 50 million won per 3.3 square meters,” said an apartment owner.

Last year Samsung C&T started presales of Raemian DMC Lucentia in Seodaemun District, central Seoul, but perspective homeowners were perplexed by the name. According to the company, Raemian is the apartment brand name for Samsung’s construction arm. Lucentia is a portmanteau of the words “lucent,” “center” and “insignia.”

The situation is the same for an apartment complex in Godeok, eastern Seoul. The apartment complex, which is being reconstructed by a consortium led by Daelim Industrial, is named Arteon, a combination of the words “art” and “theon,” or godly in Greek.

Samsung C&T also named the reconstruction of Gaepo Jugong 2 Danji apartment, which will be completed in early 2019, Raemian Blesstiage, a combination of “bless,” and “prestige.” The company was especially keen to emphasis the prestige of the complex, and also considered luxtiage, trinitage and forestige as potential names.

When the first apartments were built in Seoul in the early 1970s, it was popular to include the word “mansion” in names.

After the Seoul government briefly banned the use of non-Korean words in apartment names in 1976, companies opted to just use their name and the name of the neighborhood instead, such as Yeouido Hanyang Apartment and Apgujeong Hyundai Apartment.

In 1999, construction companies began to develop their own brand names in an attempt to stand out in a very competitive market. The apartment market at this time changed from supplier base to consumer focused.

The practice of combining foreign words to create a new name first started to appear in the 2000s, when it became more common for consortiums to win projects, rather than take a single construction company with an established brand.

This started with the reconstruction of apartments in Jamsil-dong, southern Seoul.

Three of the earliest apartment complexes to adopt this naming system were LLLs, Ricenz and III-Zium in Jamsil, southern Seoul. LLLs stands for “living, loving and leading” and Ricenz is a combination of the words “river,” “center” and “zenith.” III-Zium, pronounced Trizium, combines the roman numeral for three with the world “museum.”

“I have been living here for seven years but didn’t know that LLLs had that meaning,” said an LLLs resident.

There are construction companies that prefer to stick to Korean.

One such company is Booyoung, which has used Sarangeuro, or “with love,” as its apartment brand since 1983.

“Today it’s difficult to find simple Korean names like Gaenari [forsythia] and Jinju [pearl],” said Kwon Dae-joong, a professor at Myongji University. “The names of the apartments recently built are no different than the alien language teenagers use amongst themselves.”

Some experts point out that construction companies are focusing more on creating names than trying to improve the competitiveness of their products.

“Brands shouldn’t be used as a tool to try to raise apartment’s value,” said Ham Young-jin, head of the real estate information provider Budongsan 114. “Instead they should be focused more on trying to distinguish their brands by improving designs such as lights and other convenient facilities in the apartment or the [apartment] living environment.”