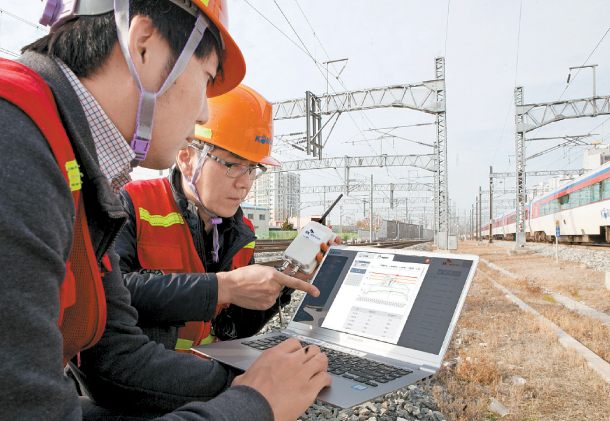 Staff from Korea Railroad Corporation monitor data collected from Internet of Things sensors attached to Korean railroads through a dashboard displayed on a laptop on Sunday. [SK TELECOM]

According to Korea’s largest mobile carrier on Sunday, its IoT system enables real-time monitoring of railway facilities and reduces work for maintenance staff at railway stations.

Every 10 minutes, sensors attached to the railroad between Seoul and Busan measure the temperature of the rails and alert railway control centers if it rises above 50 degrees Celsius (122 degrees Fahrenheit). When temperatures get too high railways can bend, greatly increasing the chance of trains derailing, the mobile carrier said.

During the scorching summer season in August, the system sent alarms to Korail more than 10 times, SK said, helping the corporation perform preventive measures quicker than before. Previously, rail maintenance staff had to travel around the country in groups of two to manually measure the temperature.

The real-time data can also be checked through smartphones.

Apart from measuring heat, the sensors also collect a range of data relating to the health of a train including vibrations, voltage and wheel tension.

While SK Telecom was in charge of connecting the system using an IoT network, Korail installed the sensors while Nable Communications developed a monitoring platform and device.

Currently there are 80 sensors installed on tracks between Seoul and Busan, with testing still in process. The mobile carrier and Korail expect to commercialize the device and systems by next year. SK also hopes to export the technology when it is completed.

“We are happy to present an IoT device and system that can enhance safety for passengers on trains as well as staff at Korail,” said Kim Jang-gi, SK Telecom’s head of IoT business.