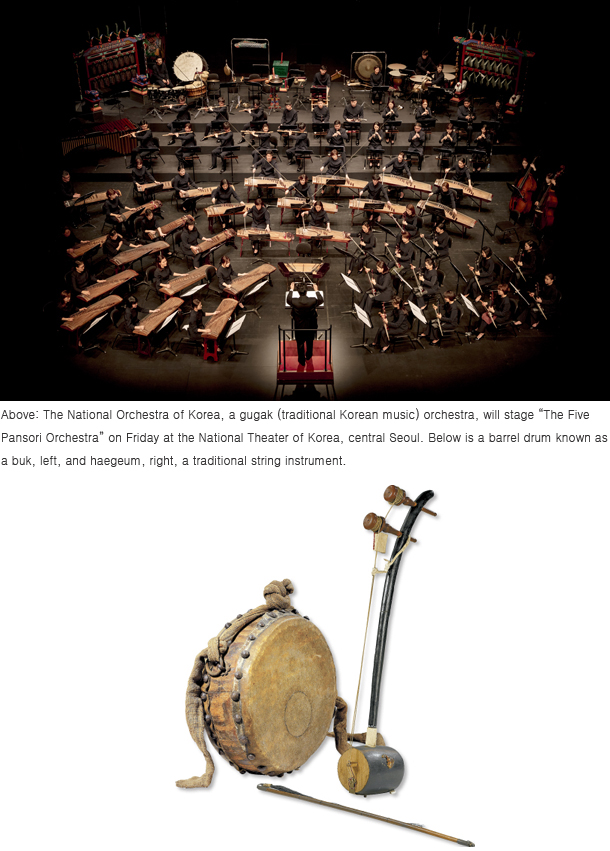 Ironically, this genre of performing arts is often shunned by Koreans for being difficult to promote overseas, as this one-man performance only accompanied by a barrel drum, known as buk in Korean, can go on for as long as eight hours, is difficult to understand and can be emotionally demanding.

In an effort to make pansori a more attractive art form, the National Theater of Korea rolled up its sleeves and is taking action. In the hopes of creating an easy-listening version of pansori, the troupe knocked on the doors of five diverse composers to create a modern version of Korea’s five surviving pansori stories - “Simcheongga,” “Chunhyangga,” “Jeokbyeokga,” “Sugungga” and “Heungbuga.”

“So far, pansori performances have been focused on inheriting the traditional heritage,” said Kim Young-sook, an official from the National Theater of Korea, “but we’ve realized that it’s time that we also create a performance that can facilitate better appreciation of our heritage.”

A new 90-minute performance titled “The Five Pansori Orchestra” will be staged on Friday at 8 p.m. at the National Theater of Korea’s Haeoreum Theater in central Seoul.

How easy-listening will the new pansori performance be?

First of all, says the orchestra, one pansori performance can go on for as long as eight hours. But the new performance, which combines five must-listen pansori, runs for only 90 minutes. Moreover, the five renowned composers in diverse fields including Kang Sang-ku, Seo Sun-jeong, Lee Yong-tak, Lee Ji-soo and Hwang Ho-joon, picked one pansori story each. The composers only chose stories that they feel confident in giving it a modern twist to, but still giving it a full sound of Korea by having the National Orchestra of Korea, a gugak (traditional Korean music) orchestra that’s part of the National Theater of Korea, to accompany the pansori singer, known as the soriggun in Korean.

“Usually, pansori is performed with just one singer and a drum,” Kim added, “but with a full gugak orchestra performing the piece, the performance seems to have become a lot more abundant in terms of its sound.”

“Chunhyangga,” which is the most familiar pansori of the five, has been reinterpreted by Kang. His most famous work is “Happiness,” a piece for a gayageum (traditional zither) ensemble that is played when a KTX (Korea’s high speed rail) train arrives at its final destination. His new version of “Chunhyangga,” doesn’t have a singer to perform the lyrics as would be expected. Instead, Kang says he attempts to tell the story only through the music.

The famous tale of “Simcheongga,” is the most tragic of the five pansori, telling the story of a daughter named Simcheong, who decides to sacrifice her life by jumping into the dark, swirling sea to let her father gain his eyesight.

Lee has already showed his talent by reinterpreting “Simcheongga” by writing the music for a changgeuk (traditional Korean opera using pansori) performance titled “Cheong,” which was a 2006 production of the National Changgeuk Company. For his latest work, he not only invited pansori singer Kim Ji-sook of the National Changgeuk Company, but also soprano Kim Seong-hye and tenor Kang Hun.

Renowned film composer Lee Ji-soo, behind famous films like “Oldboy” (2003) and “Architecture 101” (2012), decided to have a go at “Jeokbyeokga,” known as the most difficult pansori to sing among the five. His new music for the gugak orchestra will accompany some western sounds including horns, a bass trombone and a double bass, to create a more solemn sound to express the Battle of Red Cliffs. Pansori singer Kim Jun-su of the National Changgeuk Company will be doing the narrative singing.

Composer Hwang worked on “Heungbuga,” and to show a new style of this pansori, Hwang decided to invite pansori singer Choi Su-jeong who specializes in the Gyeonggi sori (a style of pansori that originates in Gyeonggi).

“We also would like to show through this new production that the gugak orchestra is more than an accompanying sound when it comes to pansori performances,” said an official from the orchestra. “If this production gets well-received, we’ll make it our a permanent part of our repertory and stage it regularly.”