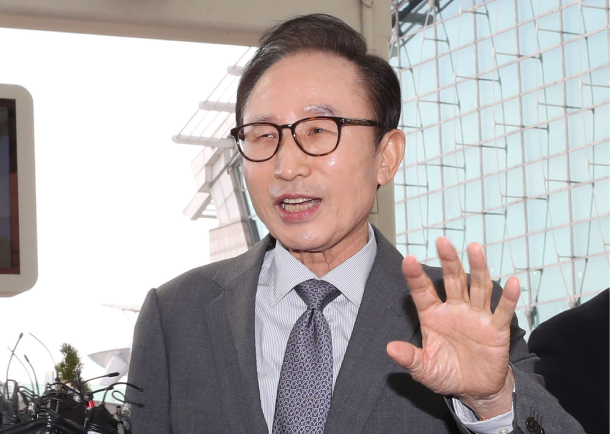 Former President Lee Myung-bak criticized the probes into allegations that the National Intelligence Service and military meddled in political affairs under his administration as “political retaliation” on Sunday, one day after the arrest of his former defense minister.

“I am one of the people with a bit of expectation for the new government,” Lee said to reporters at Incheon International Airport.

“But over the past six months, I have begun to suspect whether this is really reform, or a release of pent-up emotions or political retaliation, in the name of eradicating accumulated corruptions.”

Former Defense Minister Kim Kwan-jin was arrested at around 4 a.m. on Saturday over his alleged involvement in the military cyber command’s manipulation of online public opinion against liberals under the Lee administration.

The Seoul Central District Court earlier issued an arrest warrant acknowledging the possibility that Kim might destroy evidence or flee the country. The NIS was accused of operating online smear campaigns against liberal politicians under the Lee administration, and the probe recently expanded to the Defense Ministry and the military. The prosecution has been investigating Lee administration officials for using state power to intervene in the general and presidential elections in 2012.

President Moon Jae-in, at that time the liberal candidate, was narrowly defeated by former President Park Geun-hye, then the candidate of Lee’s conservative ruling party.

Kim, who has been charged with political interference, received reports from the military’s cyber command and issued orders on the matter ahead of the elections.

According to prosecutors, Kim is charged with ordering an online smear campaign against liberal politicians and influencing public opinion, in violation of the Military Criminal Act and abusing his power. He is also accused of having ordered the selection of civilian personnel in the military that were in favor of the conservative government for carrying out such activities.

Lim Kwan-bin, a former deputy minister of policy at the Ministry of National Defense from 2011 to 2013, was also arrested on the same day for similar charges and bribery.

Kim’s arrest is seen as an indication that the prosecutors’ probe may now be expanding to Lee. Kim earlier testified to prosecutors that he had been ordered by Lee to increase the number of agents in the military’s cyber command and select those supportive of his administration.

Testimonies by civilian military officials from that period indicated that candidates from the Honam region, referring to Gwangju and the North and South Jeolla provinces, a traditionally liberal stronghold, were excluded. But Kim has denied that he had ordered Honam candidates to be excluded.

While Lee was not named as an accomplice in the issuing of the arrest warrant, prosecutors are investigating Kim’s testimony and how much he was involved. Thus, it does not leave out the possibility that Lee may be summoned.

Lee addressed reporters briefly on the issue at Incheon International Airport on his way to Bahrain for a four-day trip, where he will give a lecture on Korea’s economic growth.

His trip sparked public rallies to prevent him from leaving the country.

But Lee focused on his belief that Korea faces a security crisis, and said, “I believe that dealing with the military or government agency irresponsibly amid such circumstances would endanger our security even more.”

He added that the current probes “would not only divide public opinion, but also be unhelpful for our security and diplomacy as well as the Korean economy, at a time when we have to seize the opportunity amid global economic recovery.”