Moon, Xi agree to ‘normalize’ ties ‘in all areas’

Moon, Xi agree to ‘normalize’ ties ‘in all areas’ 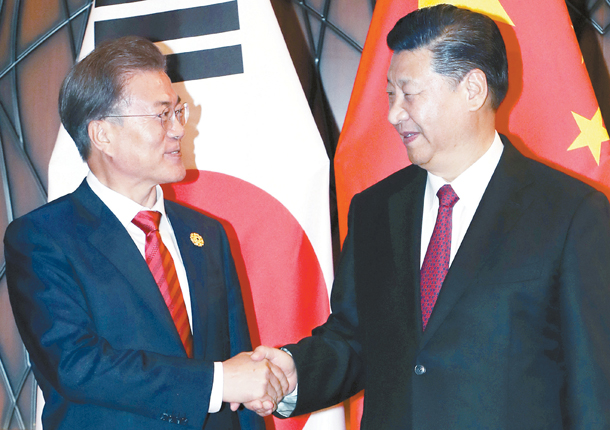 President Moon Jae-in and Chinese President Xi Jinping agreed to “normalize exchanges and cooperation in all areas” during their summit on Saturday in Da Nang, Vietnam, signaling a thaw in bilateral relations following the row over the deployment of an American antimissile system.

The two leaders held their second summit on the sidelines of the Asia-Pacific Economic Cooperation (APEC) leaders’ meeting, both expressing the need to manage the security situation on the Korean Peninsula and for the North Korean nuclear issue to ultimately be resolved through dialogue, according to the Blue House.

The summit was initially scheduled for 30 minutes but lasted 43 minutes. Moon was the second leader Xi held bilateral talks with that day, following Vietnamese President Tran Dai Quang, and followed by the leaders of Japan and the Philippines.

At the end of last month, the two countries put bilateral ties back on track after a yearlong standoff over the deployment of the U.S.-led Terminal High Altitude Area Defense (Thaad) battery in Korea, and the recent summit further cements the normalization of relations.

On the Thaad issue, Xi emphasized that the Oct. 31 agreement between the two countries marked a “new start and a good beginning.”

Last month, the two countries’ foreign ministry officials agreed to return to “a normal development track,” mending relations that have been frayed since the decision by Seoul and Washington in July 2016 to deploy a Thaad battery in Korea to defend against North Korea.

Moon said to Xi during the meeting, “Korea-China relations briefly faced difficulty, but on the other hand, it was an opportunity to reconfirm how valuable we are to one another. Let us both work hard to recover lost time.”

Xi replied that the two countries “hold extensive shared interests in regard to economic growth and global peace” and that he believes the meeting “will serve as an important opportunity for the two countries to show cooperation and leadership for the development of bilateral relations and cooperation on the Korean Peninsula issue.”

The two leaders last met in July in Berlin, on the sidelines of the Group of 20, or G-20, summit.

Moon also invited Xi to visit Korea next February, during the 2018 PyeongChang Winter Olympics. Xi reportedly said he would try to visit, and that in case he is unable to attend he will send a high-level delegation instead.

Restoring relations between Korea and China, getting North Korea to participate in the PyeongChang Olympics and creating an atmosphere conducive to talks with Pyongyang about denuclearization is a part of Moon’s comprehensive strategy toward the North, outlined in his Berlin address in July.

By agreeing on Moon’s visit to Beijing in December, the first step is now seen as having been achieved.

The Blue House initially said the Thaad issue was not going to be raised during the summit, but Xi brought it up.

The Chinese Foreign Ministry said in a statement afterward that Xi reiterated China’s position on Thaad and that Moon said that he recognized China’s concerns and that Korea has no intention of harming its security interests.

The Blue House statement on the results of the meeting did not go into detail regarding Thaad, but a Blue House official told the JoongAng Ilbo, when asked whether Moon addressed Korean companies in China being affected by economic retaliation over Thaad, “There was confirmation that the economy has to be improved comprehensively and quickly, and I believe that was included in this.”

The official added, “There was talk of improving relations in all areas, and there was already mutual understanding reached beforehand that this includes the companies and tourism [affected by China’s retaliation], and the two leader’s perception was in line with this.”

Moon wrapped up his three-day trip to Da Nang and arrived in the Philippines for the third leg of his Southeast Asia trip Sunday, to attend Association of Southeast Asian Nations (Asean) regional forums. He is also scheduled to hold talks with Chinese Premier Li Keqiang for a follow-up on bilateral relations on Monday on the sidelines of the East Asia Summit, and to discuss how to ease the economic retaliations China has taken against Korea.