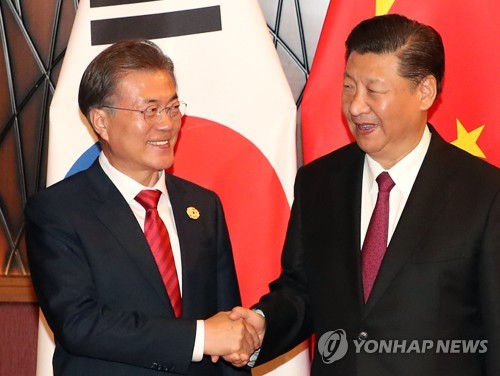 The leaders of South Korea and China on Saturday reaffirmed their joint efforts to peacefully resolve North Korea's nuclear problem in a summit highlighting the recent normalization of bilateral ties estranged by the deployment of a U.S. missile defense system in South Korea.

The leaders "shared the view on the need to stably manage the current security condition on the Korean Peninsula in relation to North Korea's nuclear and missile programs and agreed to peacefully resolve the North Korean nuclear issue through dialogue," Seoul's presidential office Cheong Wa Dae said of the meeting between South Korean President Moon Jae-in and Chinese President Xi Jinping.

To this end, the two countries agreed to strengthen their strategic dialogue.

The leaders also agreed to continue their discussions next month when the South Korean president will make a trip to China for their third bilateral summit, according to Cheong Wa Dae.

Moon asked the Chinese leader to reciprocate his scheduled visit with a trip to South Korea during the 2018 PyeongChang Winter Olympic Games in South Korea in late February.

Xi said he will try his best and send a high-level delegation if he is unable to attend.

The Moon-Xi meeting came after months of disputes caused by China's protest against the deployment of the THAAD missile defense system in South Korea.

"I am very glad to see you again after four months," Moon said at the start of their bilateral summit held on the sidelines of the Asia-Pacific Economic Cooperation Economic Leaders' Meeting here in the Vietnamese city. The two last met in Berlin in July before the Group of 20 summit in Hamburg, Germany.

"Also, I am glad that our two countries have agreed to normalize exchanges and cooperation in all areas," he added, according to Cheong Wa Dae pool reports.

The latest South Korea-China summit came after the countries agreed to normalize their ties in an agreement issued Oct. 31.

Xi said the Oct. 31 agreement marked a "new start and a good beginning."

"While welcoming the agreement released Oct. 31, the two leaders agreed to quickly put the countries' exchange and cooperation in all areas back to the normal track," Moon's chief press secretary Yoon Young-chan told a press briefing.

Xi noted his meeting with the South Korean leader marked a turnaround in South Korea-China relations.

"I believe our meeting today will be a great opportunity for the development of the relationship between the two countries and their cooperation and leadership on issues regarding the Korean Peninsula," he told Moon through his interpreter.

The Chinese president also underscored the importance of South Korea-China relations, saying the conditions on the Korean Peninsula were at a "pivotal" juncture.

Saturday's meeting came about two months after the North staged its sixth and most powerful nuclear test so far on Sept. 3.

The request was part of a high-level dialogue held shortly before the Moon-Xi summit.