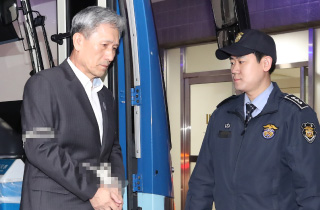 Former Minister of National Defense Kim Kwan-jin gets off a bus on Monday as the prosecution investigates his alleged involvement in the Cyber Command’s meddling in politics. [YONHAP]

Kim Kwan-jin was named the minister of defense after South Korean troops’ morale plummeted after losing dozens in the North Korea’s sinking of the Cheonan warship and shelling of Yeonpyeong Island in 2010. After serving as the chairman of the Joint Chiefs of Staff in the Roh Moo-hyun administration, he had been retired from the military at the time of the appointment.

President Lee Myung-bak hired a military leader of the Roh government on the brink of a war. Kim was recruited based on the praise that he was the best person to cheer up the plummeted morale of the soldiers and win a victory in a battle against the military leadership of North Korea. The first thing Kim did as defense minister was a massive artillery drill on Yeonpyeong Island. It was the spirit of an eye for an eye to retaliate against what happened in Yeonpyeong seven years ago.

The United States military had protested Kim’s plan. They worried that it would provoke the North. Kim, however, did not concede. “If we do nothing after the attack, the enemy will look down on us. A war can only be stopped with the will to go into a war,” he said.

Less than a month after his appointment as the defense minister, officials in the Pentagon began talking about the so-called “Kim Kwan-jin effect.” They admitted that his will to launch a deadly retaliation helped restrain the North’s provocations.

President Lee’s successor, Park Geun-hye, continued to use Kim as the defense minister as she failed to find a suitable replacement among her aides after winning the election in 2012. The North Korean military did not hide its irritation. His photos were hung as targets for firing drills. Military dogs were trained to attack a mock-up of Kim. Letters and leaflets threatening his assassination were spread in Seoul.

After Kim was later named to head the National Security Office at the Blue House, a land mine attack took place at the tense border in August 2015. He responded by installing loudspeakers at the border to resume propaganda broadcasts. He responded to the North with a larger escalation. The North Korean military leadership ended up admitting to the installation of the land mine and expressed its regret.

Kim Kwan-jin was a real threat for Kim Jong-un. Lee Seok-ki, a former lawmaker and follower of the regime in Pyongyang, tried his best to kick Kim out from the minister post. “Minister Kim is making the people uneasy with his extreme remarks such as ‘we must stop the enemy’s breath’ and ‘I will take military actions when South Koreans are taken hostage in the Kaesong Industrial Complex,’” Lee said in the National Assembly during an interpellation in April 2013 when he was serving as a lawmaker for a pro-North Korea party.

While serving as defense minister and head of the National Security Office for seven years, Kim probably could not respect all procedures and principles. But it went too far for the prosecution to accuse him of interfering in domestic politics for having ordered a stern cyber campaign against the protesters who fiercely tried to obstruct the government’s construction plan of a naval base in Jeju. It is also nonsense to condemn him for ordering soldiers not to listen to the radical “Naggomsu” podcast which insulted then-President Lee, commander in chief at the time, while Kim was serving as defense minister.

Is it necessary for a four-star general who served 35 years in the military to go to jail for such charges? A punishment can be justified when it is proportional to the magnitude of a crime. When justice goes too far, it is cruelty. If the real reason of sending Kim to a detention center is to go after former President Lee, the prosecution deserves the criticism for a political retaliation. The honor of an old soldier must be protected.