Airlines turn to chatbots, beacons to stay ahead

Airlines turn to chatbots, beacons to stay ahead 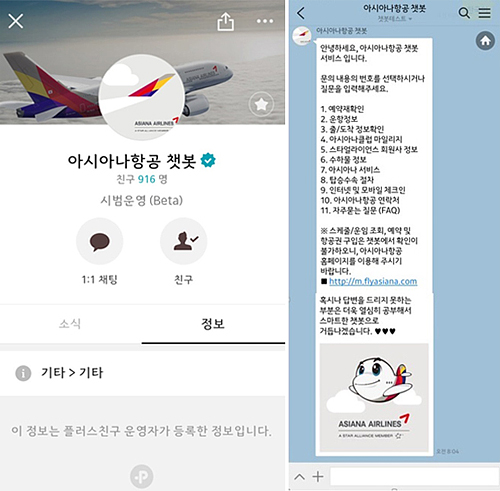 As competition grows ever fiercer in the air carrier market, airlines are turning to chatbots and beacons in an attempt to stand out from the crowd.

The chatbot, built based on Microsoft’s cloud platform “Azure” and artificial intelligence-powered natural language processing technology, can give users information related to booked flights, membership mileage status and frequently asked questions. As it is still a beta version, the chatbot’s capability is limited to answering questions in 11 categories. A wider range of services will become available next year based on feedback, according to the airline.

Checking fares and overall flight schedules or booking a new ticket is not yet possible through the chatbot.

“The addition of a chatbot service is expected to substantially relieve the stress of customers that previously had to wait until they were connected with customer service personnel even for simple inquiries,” said Nam Ki-hyung, senior vice president of commercial affairs at Asiana Airlines.

Rival Korean Air is yet to release a chatbot through messenger apps, but does offer a similar service through its website. According to a Korean Air spokesperson, related services are being developed, but no concrete plans are available right now.

Among foreign airlines, FinnAir has also adopted a chatbot that works through Facebook Messenger in September. Customers can book airline tickets, check changes in flight schedules and view regulations regarding carry-on luggage from the robot. While the chatbot only speaks English at the moment, the airline is due to add Finnish and Chinese by the end of this year.

German airline Lufthansa was an earlier adopter of chatbots, introducing its beta version, dubbed “Mildred,” last year. The name represents the service as well as the avatar that talks to customers. The robot works through Facebook Messenger and notifies customers of deals when it’s told a specific destination.

Apart from adding chatbots, airlines are also turning to Bluetooth technology to find new ways to improve the customer experience during travel.

Asiana Airlines is preparing to launch a so-called hybrid beacon service, which tracks a customer’s position in Incheon International Airport and delivers useful data via push alarms to their smartphone.

The beacon service, powered by Bluetooth, can guide a customer to Asiana’s check-in counter or automatically load mobile flight tickets as they near the boarding gates, according to the airline.

“As most customers carry smartphones these days, the beacon-based service can be useful at complicated airports,” a spokesperson from Asiana said. “It has become one of our key agendas after setting ‘leading the fourth industrial revolution’ as our corporate goal.”

Korea’s leading low-cost carrier Jeju Air is attempting to offer marketing services using beacons. In partnership with Jeju International Airport, customers will receive coupons when they pass by the airport check-in counter or near partnering shops.