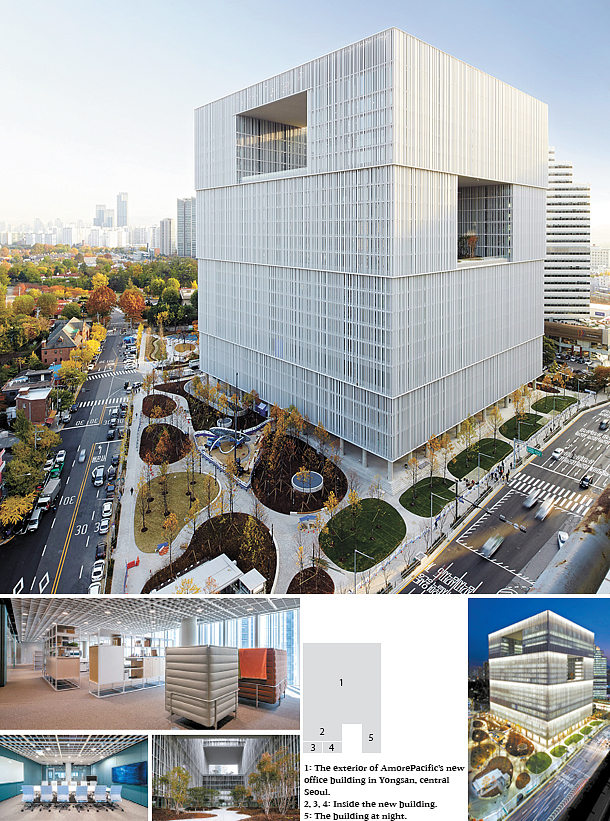 AmorePacific Group, Korea’s largest cosmetics company, is returning to its original home in Yongsan District, central Seoul, with a new office building that represents the brand’s ambition and creativity.

The 72-year-old company, which built its first office in Yongsan back in 1956, announced Monday that some of its 3,500 executives and employees working at AmorePacific Group and its affiliates will start moving into the new office from next Monday.

The new headquarters has been under construction for the past four years and AmorePacific employees have been working at a rented office near Cheonggyecheon during that time.

“AmorePacific began its beautiful dream in Yongsan District back in 1956 and now it has grown to be part of a global paradigm,” said Suh Kyung-bae, chairman of AmorePacific Group in a statement. 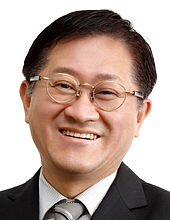 “We aim to build a new dream right here at AmorePacific Group’s new headquarters which will become a global hub of beauty in the future,” Suh added.

The group’s affinity with Yongsan District goes back to 1956, when the company founder Suh Sung-hwan first built an office on the back of the success of its initial products including facial cream and pomades. Suh Sung-hwan founded the company as Taepyeongyang in 1945 in Kaesong. He expanded the Yongsan venue to a 10-story building in 1976.

The current chairman and CEO, Suh Kyung-bae, the founder’s son, selected the old company site to build on his dream of becoming a “great company,” which he revealed as the company goal earlier this year.

Chipperfield, a relatively unknown name in Korea, has designed the Museum of Modern Literature in Germany and the Saint Louis Art Museum in the United States, among others.

Suh is known to have taken care of even the most trivial elements of the new building such as deciding on the shelves, chairs and desks for the new office space. Swiss furniture brand Vitra has been selected to fill the space.

The bottom three floors and the basement of the new office building offer cultural facilities that are open to anybody, including a museum, library and cafes.

The fifth floor is a welfare space for AmorePacific employees and the floors above are dedicated to office space, some of which will be rented out to other companies.

The dominant concept for the new building is ensuring open communication, not only with AmorePacific employees but with the local community, as well.

“Among other values, chairman Suh Kyung-bae emphasized that the new office building should be a place for communication and where employees could connect with each other,” said a company official.

“The architectural layout proposed by David Chipperfield has been selected based on that belief as well,” the official added.

Inspired by the moon jar, a traditional Korean porcelain jar, the 64-year-old architect expressed the constrained yet serene and comfortable beauty of Korea for the new headquarters.

The gardens included in the building that resemble the courtyards often found in traditional Korean houses, was another reason that Chipperfield’s proposal stood out among others, according to a company official.

The new building accommodates three gardens that take up an entire side of three separate sections of the cube-shaped building. The gardens take up an average of five to six floors and are built on the 5th, 11th, and 17th floors of the building.

“Having three gardens within the building, employees of AmorePacific can relax and take their own time although they are working inside the building,” the company official explained.

The fifth floor is dedicated to welfare facilities exclusively provided for company employees.

There is a company cafeteria and cafe that can accommodate 800 people. The building also includes a fitness center where 130 people can exercise, as well as separate spaces where they can relax and receive massages as well. Individual working spaces went through a renewal as well.

The partitions that divide desks were eliminated and the walls for meeting rooms use transparent glass.

“Floors between six and 12 are dedicated to offices and we put a focus on making a space that enables open communication,” the company official said. “In our previous offices, all desks were divided by partitions making it not so easy to communicate among team members,” the official explained.

“We tried to make the new office a venue for communication which can reinvigorate the local community with cultural value while acting as an open and comprehensive work place as well,” a company official said.

Emphasizing connectivity applies to the local community as well.

AmorePacific has made its bottom three floors and basement an open space which anybody can visit.

The basement floor is dedicated to the AmorePacific Museum of Art, which will offer not only exhibitions but also educational programs as well to bolster its communication initiative.

The three-story atrium will house a library dedicated to extensive exhibition catalogs. Next to it will be an O’Sulloc Tea House, the tea brand under AmorePacific which specializes in natural green tea as well as other herbal teas.

The second and third floor will accommodate an auditorium that will be used not only for company events but also for other cultural programs provided to local residents. There will be a cafe run by cosmetics brand Innisfree on the second floor as well.

“The bottom floors of the building are generally used for commercial purposes,” said the company in a statement. “However such facilities are not found at AmorePacific Group’s Yongsan building.

We tried to make a space that is helpful for public interests and cultural interaction,” the company added.

Contributing to the community

Every nook and cranny of the new office building will act as an incubator for emerging artists and architects in Korea as well.

The cosmetics powerhouse joined forces with stpmj, a duo of young architects comprising of Lee Seung-teak and Lim Mi-jung, to design an underground passageway connecting the new building and nearby Sinyongsan Station on line No. 4.

The furniture displayed in the communal space on the first, second and third floors are designed by various emerging artists in Korea, including Lee Kwang-ho, Yun Yeo-bum and Studio Millionroses.

The management office located at the back of the building has been designed by architect Yang Soo-in.

Suh Kyung-bae is widely known for his deep interest in art and architect. For that reason, the company has been rolling out a range of cultural sponsorship programs represented by the AmorePacific Museum of Art Project, known as APMAP, which supports contemporary artists.

The Sulhwa Cultural Exhibition, named after its flagship medicinal herb cosmetics brand, is held annually to offer beauty that imbues the old with the new, collaborating with local emerging artists.