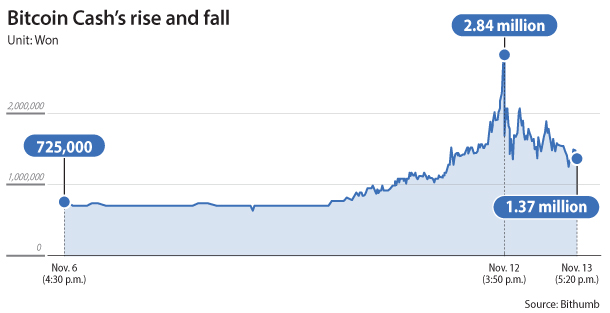 Hordes of digital currency investors tried selling bitcoin cash on the Bithumb exchange Sunday afternoon but its server crashed due to the flood of traffic.

Bithumb is the largest virtual currency exchange in Korea out of three major exchanges: Bithumb, Korbit and Coinone.

Bitcoin cash is a spinoff of bitcoin created on Aug. 1.

In Korean won, the value of bitcoin cash soared to a record high of around 2.84 million won ($2535.8) at 3:50 p.m. Sunday. According to Bithumb, it took less than two hours for the value to fall nearly 40 percent to 1.68 million won at 5:40 p.m., causing investors to panic. The crash of Bithumb’s server occurred at around 4 p.m. The server resumed functioning at around 5:45 p.m.

Bithumb issued a statement apologizing for the crash and said it was expanding its server capacity to meet growing traffic.

After watching their digital currency investment going into free fall without being unable to sell, more than 3,800 investors are planning to sue the exchange.

Launched in January 2014, Bithumb is one of the top five exchanges in the world for digital currency transactions.