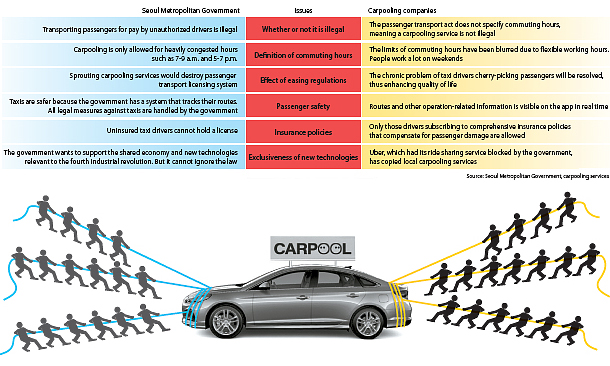 Let’s say there is a professor on his way to a 9 a.m. lecture who offers a ride to someone who is going in the same direction and receives a small amount of cash in return. There is nothing illegal about that.

But it’s a different story if the same person gives a ride at 1 p.m. Whether that violates the passenger transport service act has risen as a hot-button issue after the Seoul Metropolitan Government began cracking down on a carpooling start-up.

On Nov. 8, just two days after Poolus, a Pangyo, Gyeonggi-based carpooling start-up, updated its service by expanding the operating hours, the Seoul Metropolitan Government asked the police to investigate the firm. The government says the service is illegal.

Ever since it launched in July last year, the start-up had limited operation hours to commuting hours: from 5 a.m. to 11 a.m. and from 5 p.m. to 2 a.m.

The company then decided to launch a pilot service available 24 hours a day, which was intended to come into effect on Nov. 6. It was for commuters that go to work at unconventional hours as more companies - one third of all workers, according to Poolus’ own survey - implement flexible working hours.

Carpool drivers still have to travel to and from work in a set window, however.

“We decided to expand to service hours that better correspond to reality,” said a Poolus spokesman.

The Seoul Metropolitan Government says 24-hour operation violates Article 81 of the Passenger Transport Service Act - the ban on commercial transport by private cars. Article 81 stipulates that automobiles other than those intended for business cannot get compensation for journeys.

Poolus originally took advantage of a loophole in the article that applies to people carpooling for their commute to and from work. But the phrase does not define the commuting hours.

Once the service became available around the clock, the Seoul government took issue with it, saying it is no different than “a taxi run by drivers with no taxi license.” 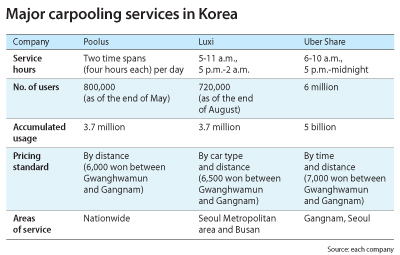 Poolus contends that it still imposes a limit on drivers - eight hours per day, five days per week - so that there won’t be any illegal operation.

But Seoul has a different idea.

“Carpooling is supposed to be utilizing private vehicles that are driven by a single driver during hours when demand for public transport is high and supply is low,” said Yang Wan-soo, manager of taxi logistics at the Seoul Metropolitan Government.

“But its operation during idle hours in the daytime would only rattle the basis of the taxi licensing system,” adding, “Unless any regulatory measure is applied to Poolus, other carpooling services will scramble to jump on the bandwagon.”

The ongoing conflict between the start-up, which is barely two years old, and the Seoul Metropolitan Government is reminiscent of what happened between Uber and the city government four years ago.

After Uber launched Uber X, which allowed anyone with a vehicle and a driver’s license to offer rides cheaper than normal taxis, in August 2014, local taxi drivers fiercely rebuked the service, claiming their livelihood was being endangered.

The Seoul government declared all Uber services illegal in January 2015 and Uber was forced to scrap Uber X in two months. In the meantime, Kakao, operator of the KakaoTalk chat app, launched a taxi hailing service.

Inspired by the success of local carpooling services, Uber in September launched a commuting carpool service called Uber Share. The new service only operates out of the Gangnam area, and its service hours are restricted to rush hour - between 6 a.m. and 10 a.m. and 5 p.m. and midnight on weekdays.

The start-up community is standing up against the city government’s crackdown on the new service.

“The government has provided trillions of won to boost entrepreneurship and promised to take the fourth industrial revolution as a key pillar of national economic growth and now it’s trying to make entrepreneurs offenders,” wrote Kim Bong-jin, founder and CEO of Woowa Brothers, which runs a food delivery service, Baedal Minjok, on his Facebook on Nov. 7.

“It’s hard to understand the government’s duplex attitude. So many new ideas ranging from peer-to-peer finance to carpooling, used car dealing and craft beer are about to die at the opposition of existing established businesses.”