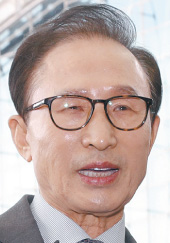 Speculation is growing that the prosecution will soon question former President Lee Myung-bak in multiple probes of his administration’s alleged interference in domestic politics and a corruption scandal involving the businessman-turned-politician.

Lee’s name came up in several probes, prosecutors said. One of the key investigations is the suspicion that the military’s cyber command manipulated online public opinion against liberals during the Lee presidency. Former Minister of National Defense Kim Kwan-jin was detained on Saturday in that probe.

Kim already admitted that he had briefed Lee about the plan to increase manpower of the cyber command in July 2012 and received an order. Kim, however, said the activities were a legitimate part of the cyber command’s operations. The prosecution did not list Lee as a co-conspirator when it sought a warrant to detain Kim.

A document of the cyber command created in March 2013 and signed by Kim showed that civilian workers for the command were increased at the order of then-President Lee.

If Lee is investigated for ordering or giving tacit approval to the cyber command’s illegal operations, he will be questioned for having violated the Constitution and the Military Criminal Act, which stipulates the political neutrality of the military, sources said.

Article 94 of the Military Criminal Act says a service member who spreads opinions supporting or opposing a specific political party or politician by taking advantage of his or her position shall be punished by imprisonment with labor for up to five years. The punishment is heavier than the three-year imprisonment for the same crime committed by a civil servant.

Lee’s presidency is also being investigated for another scandal involving political intervention. The National Intelligence Service (NIS), during the leadership of Won Sei-hoon from 2009 till 2013, was accused of having run illegal domestic political operations including a cyber campaign to smear then-liberal candidate Moon Jae-in in the 2012 presidential election.

If Lee’s involvement in the NIS’s campaign is confirmed, he will also face charges of violating the Public Official Election Act.

“Lee can be prosecuted as a co-conspirator or aiding and abetting violations of political neutrality of the military and public servants,” a lawyer who had served in the military court told the JoongAng Ilbo.

The prosecution is also pursuing another case involving Lee and the NIS. The intelligence authority was accused of having created a blacklist of 82 cultural figures and artists in 2009 and suppressing career opportunities for them, the prosecution said. The probe was launched at the request of the NIS, which discovered suspicions that the agency had pressured conglomerates to back conservative celebrities and artists during the Lee presidency.

Another scandal involving Lee and DAS, an auto component manufacturer co-owned by Kim Jae-jung, Lee’s brother-in-law, and Lee Sang-eun, Lee’s elder brother, is also being investigated by the prosecution.

Lee was accused of abusing his power as president to pressure his former business partner Kim Kyung-joon to return massive investments DAS had made into Kim’s failed venture. In 2011, DAS retrieved 14 billion won ($12.5 million) from BBK, a now-bankrupt investment firm established by Kim. In 2001, BBK was used to commit massive financial fraud, and Kim was later prosecuted and convicted of stock price manipulation and embezzlement of 31.9 billion won.

Speculation was raised that Lee had used the Blue House and Foreign Ministry officials to collect the DAS’s investment from BBK before small private investors retrieved their money through a civil suit.

The case is currently assigned to an advanced financial crime team headed by senior prosecutor Shin Bong-su. He previously participated in an independent counsel probe on Lee’s alleged tie to the BBK scandal in 2008, when Lee was president-elect.

During the 2007 presidential campaign, the financial scandal plagued Lee. Lee insisted that Kim founded BBK, while Kim said Lee was the real owner of the failed firm and the true beneficiary of the investment fraud. In December 2007, days before the presidential election, the prosecution cleared Lee of any involvement in the BBK fraud.

The prosecution will now investigate a suspicion that Lee is the true owner of DAS. During a recent National Assembly’s interpellation, Yoon Seok-yeol, head of the Seoul Central District Prosecutors’ Office, told lawmakers that the prosecution will legally verify who actually owns DAS.