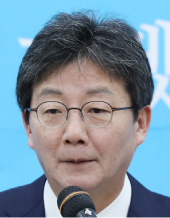 The opposition Bareun Party picked its former presidential candidate, Rep. Yoo Seong-min, as its new leader on Monday in an election overshadowed by internal division, mass defections and its reduced presence in parliament.

The economist-turned-lawmaker secured 56.6 percent of the vote, beating five other contenders, including representatives Ha Tae-kyeung, Jeong Woon-chun and Park In-sook. His election was based on the combined results of a vote by party delegates and a public opinion survey.

Ha, Jeong and Park were elected as members of the party’s decision-making Supreme Council.

In his acceptance speech, Yoo called for internal unity and vowed to continue the party’s drive for “new” conservatism.

“Let’s go back to the basics and work together for new conservatism,” he said. “Let us continue to strive for unity among centrists and conservatives who share our vision for the future of the country and reform.”

The conservative party had been rudderless since former leader Lee Hye-hoon resigned on Sept. 7 amid a graft scandal. The scandal dealt a blow to the party’s push to become a reformist alternative to the main opposition Liberty Korea Party (LKP).

Yoo’s election came after eight lawmakers defected to the LKP last week in a move to unify the fractured conservative camp and better rein in increasingly assertive liberal rivals ahead of next year’s local elections.

The defections stripped the Bareun Party of its status as a parliamentary negotiating bloc, which requires at least 20 lawmakers of the 299-member National Assembly.