This season, Oh Se-keun of Anyang KGC is on track to become the second domestic player in the KBL to get a “double-double.” 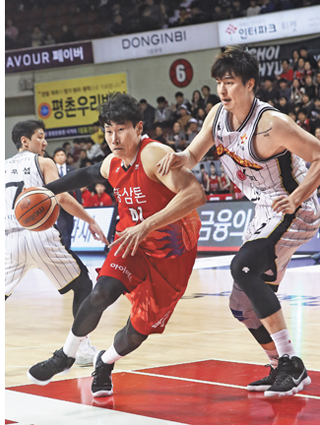 Oh Se-keun of Anyang KGC during a game against the Changwon LG Sakers in Anyang Gymnasium on Sunday. [YONHAP]

A double-double is when a player gets 10 or more points and 10 or more rebounds, either in one game or on average for the season. Only six players, five of them foreign, have done this on average for a season in the Korean Basketball League (KBL). The only Korean player to do it was Ha Seung-jin of Jeonju Egis KCC during the 2011-12 season, scoring an average of 13.3 points and 10 rebounds per game.

During the KGC’s game against Changwon LG Sakers on Sunday, Oh scored 21 points and got 13 rebounds, making it his sixth straight double-double game. As of Monday, Oh has an average of 20.6 points per game and 10.4 rebounds. With Oh’s double-double and David Simon’s 32 points and 10 rebounds during the game against the Sakers, the KGC’s winning average is now above 50 percent.

After a successful collegiate basketball career, during which he became the first basketball player in the university basketball league to achieve a quadruple-double during his senior year at Chung-ang University, Oh was drafted first by Anyang KGC in the 2011 Rookie Draft.

Just when it seemed the best was behind him, Oh is off to a great start this season, with a triple-double during the first round of the KBL.

“I don’t pay attention to the record,” Oh said. “Our manager emphasized teamwork so I try to play with the team. My role this season has allowed me to score more and I try to have more rebounds. Personally, I think it’s a good thing for my rebound figures to go up.”

Oh is now training with the Korean national basketball team at Jincheon National Training Center, preparing to compete at the Asian qualifier for the 2019 FIBA Basketball World Cup, starting on Nov. 20.

This will be the first FIBA world cup to follow a home-and-away pattern. So until July, Korea will have to play one home and one away game with the teams assigned in Group A: China, New Zealand and Hong Kong.

In August, the national team defeated New Zealand, ranked 20th, to win a bronze medal at the 2017 FIBA Asia Cup in Beirut, Lebanon.

“We’ll need to start all over since we’re missing our starting players, Kim Sun-hyung and Kim Jong-kyu,” Oh said. “We don’t have much time, but the players have great abilities. We’ll do our best and play great games.”

Since the national team call-up was on Monday, the KBL will have fewer games than usual this week and next week, as some teams had to continue their season without their starting players, due to the qualifier. Each team is only playing two to three games this week, and the KBL will take a week off from the regular season schedule starting on Monday.