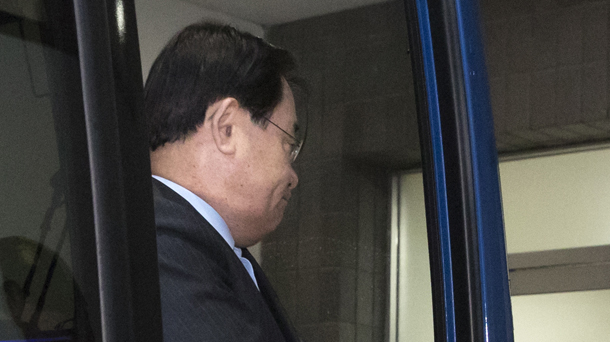 Lee Byung-kee, former head of the National Intelligence Service and former chief of staff in the Park Geun-hye administration, arrives at Seoul Central District Prosecutors’ Office Tuesday during an investigation into the spy agency’s alleged misuse of special expenses. [AP/YONHAP]

As soon as he was inaugurated as the new chief of the National Intelligence Service (NIS) on July 18, 2014, Lee Byung-kee received a handwritten note from Choo Myeong-ho, then head of the agency’s domestic intelligence unit. The note had the names of blacklisted figures within the spy agency. Lee scorned him and ripped the note apart.

Choo did not mind. He took orders from Choi Soon-sil, the clandestine friend of President Park Geun-hye, and Woo Byung-woo, Park’s senior secretary for civil affairs. Lee, head of the spy agency, received orders from the Blue House to promote Choo. But he did not comply.

Lee often clashed with Park’s closest aides in the Blue House after he was recruited as the chief of staff in 2015. One presidential aide recalled an incident. Salvaging the sunken Sewol ferry while hundreds of passengers were still missing had been a taboo at the Blue House after the tragic disaster on April 16, 2014 as public anger towards the government for its slack rescue operation was at a boiling point. But soon after joining the Blue House team, Lee recommended that the government proceed with the operation to lift the ship from the water. Park went white. “The job costs over 150 billion won [$134.1 million]. Who would agree to it?” she questioned. Lee did not budge. “Even if it costs 1 trillion won, we must do it if the people want it.”

Such talking back to the president was unimaginable at the Blue House under his predecessor Kim Ki-choon.

Lee has been summoned by the prosecutors investigating additional malpractice in the Park administrations following testimony from Park’s former aides that the NIS regularly handed over funds from the confidential account for special operations to the Blue House. All of the three NIS chiefs that served under Park — Lee, Nam Jae-joon, and Lee Byung-ho — are being probed. The investigation is a part of the liberal government’s crackdown on the malfeasance and wrongdoings of the past to root out “past ills” in the public sector.

But if fixing wrongdoing is the idea, the activity must be fair. The aides have been saying that giving some of the NIS special account funds to the Blue House was customary. If so, the prosecution must find out when such a tradition began. All the NIS directors under former presidents Kim Dae-jung and Roh Moo-hyun must also be questioned. It is unfair that Lee and others were chosen as scapegoats just because they served under a disgraced president.

Korean spy agents serve their country entirely out of patriotism. They should not be bundled up as examples of past ills. Their sacrifice and devotion to their country must be respected and appreciated.

In order not to shame their name and at the same time end the tradition of the NIS falling into servitude for political purposes, the framework of the intelligence service will have to be overhauled. Either transform it into an independent body, or separate its functions. For instance, the United States runs 16 separate intelligence units, including the CIA and FBI, all under the Director of National Intelligence, to ensure independence and efficiency of intelligence service. Otherwise, NIS chiefs will keep being summoned even after President Moon Jae-in’s term ends. The merry-go-round must end.

What the country really needs to revamp is its predisposition. All the media hype about the death of legendary folk singer Kim Kwang-seok pointed to his wife as the murderer of the beloved singer and their daughter purely out of suspicion. Scientific evidence and experts’ arguments on reasonable doubt went muted. Ruling party politicians who love publicity joined the chorus. Police were pressured into a reinvestigation and found no additional evidence that the widow was accountable for the deaths of her husband and daughter.

That’s not all. A journalist who led the slander campaign said that the police findings did not satisfy public suspicion. But the very person who had planted suspicion in the public and turned the widow into the most hated person in the country by painting her as a greedy and immoral person who caused the deaths of her husband and daughter did not offer a single word of apology. The journalist instead apologized to the witnesses.

Justice has become all mixed up in this country. We cannot call ourselves a matured society if our minds are led by emotions instead of reason.