Taking it outside, where all the world’s a stage : Spontaneity of immersive storytelling appeals to theater fans

Taking it outside, where all the world’s a stage : Spontaneity of immersive storytelling appeals to theater fans 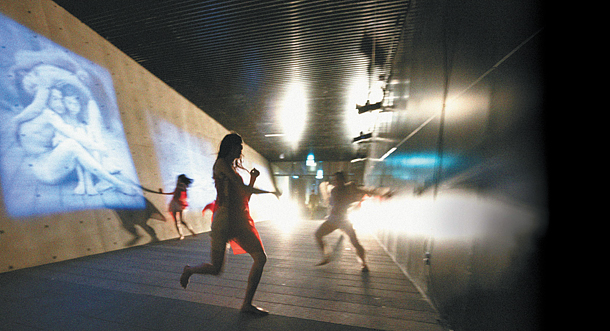 One of the 21 projects from Arts Council Korea (ARKO) and Arts Council England’s joint fund, a bilateral investment for artistic collaboration between Korea and England, the performance utilized two gigantic tanks once used to store oil as an immersive architectural space for the performance. Dancers performed throughout the venue while the audience wandered in and out of the tanks, following the performers.

Before entering the unknown space to enjoy “MIIN,” the audience felt a mix of excitement and nerves - everyone was expecting something unimaginable.

“MIIN” is a performance that examines femininity, and takes the form of an exciting play that stimulates all of the senses. JoongAng Sunday’s S Magazine, an affiliate of the Korea JoongAng Daily, explored several immersive plays, where the audience becomes the center of performance.

Over the past few weekends in Daehangno, central Seoul, hordes wearing mint-colored headphones were spotted walking through the streets, participating in an immersive performance titled “Road Theater Daehangno 2.” Produced by ARKO, it is an upgraded version of last year’s “Road Theater Daehangno,” which guided the audience to tour each corner for the theater district.

Thanks to its extended story and word of mouth, the latest version of the performance saw its audience numbers jump by 10 percent. Wandering the streets while listening to narration and music, the audience feels as if they are staging a performance in the middle of the bustling Daehangno.

Over the past several years, a series of immersive performances that make the audience part of the show have sprung up in Seoul.

Some performances, like “Every Show’s a First Today!” are improvisational, and performers ask for requests from the audience to create a story right on the spot. Similarly, “White Rabbit Red Rabbit” selects audience members to join in and complete the performance with the help of other viewers.

Though immersive performance may seem refreshing to some, the concept is nothing new.

Immersive performance, according to the director of “Road Theater Daehangno” Lee Gon, is “a form of performance adapted from old festivals.”

“Mystery plays staged on the streets during festivals in medieval times and the Korean sandae nori (mask dancing) that was performed when Chinese envoys visited our palaces are examples of these kinds of performance, which involve the audience’s participation in a setting that has been shifted from a familiar space to something unfamiliar.”

Immersive performances peaked in popularity abroad in the 1960s, and recently made a comeback after the British theater company Punchdrunk had a mega-hit with “Sleep No More.”

A mix of Shakespeare’s classic Macbeth and a Hitchcock movie, the show involves masked audience members wandering through 100 different rooms in a hotel and following performers who mime their way through the performance. It premiered in London in 2003, and was also adapted in New York in 2011.

Though it was originally scheduled to run for a month in New York, the play was met with an explosive response and quickly became a must-see attraction for tourists. The show expanded to Shanghai in 2016 and is now captivating Asian audiences.

Other similar performances include “Then She Fell,” a successful immersive theater production riffing on Victorian hospital wards and Lewis Carroll’s Alice in Wonderland books, and “The Grand Paradise,” an interactive tour of an imaginary Floridian pleasure palace from the 1970s. Both are the works of Brooklyn’s Third Rail Projects, a popular purveyor of site-specific, experiential performances.

Following the global trend, public institutions took the lead in introducing immersive performance to Korea. In 2012, ARKO invited Australian theater group One Step at Time Like This to the Seoul Performing Arts Festival (SPAF), and opened “Road Theater Daehangno” in 2016.

“Daehangno is one of the rare performance spots in the world where 130 theaters are gathered,” said Lee Je-seung, who organized “Road Theater Daehangno.”

“We picked Daehangno, which is like a big theater itself, as the space for the audience to be able enjoy the performance with all five senses.”

“The Spotlight on Me: Make up Project,” which the National Theater of Korea staged for seven months in 2014, was created to appeal to children. The performance involved the kids performing “Sugungga,” a famously satirical story.

ARKO also staged “The Show is Tomorrow, What Should I Do?”, a mission-driven performance where the audience was only able to move to the next location after completing a mission.

“The Show is Tomorrow, What Should I Do?” is a mission-driven performance where audiences can only move to the next location after clearing a mission. It combines role playing and games into the performance. [ARKO]

In immersive performances like “Road Theater Daehangno” and “The Show is Tomorrow, What Should I Do?”, audiences become a part of the play. [ARKO]

Immersive theater has become a new trend in the performing arts both in and out of Korea. At left is “Road Theater Daehangno 2” and at right is “Sleep No More” which triggered the popularity of immersive performance around the globe. [PUNCHDRUNK, EMURSIVE]

The power of place

Immersive performance demands neither high quality acting from actors nor a fixed story. The most important factor to keeping the audience’s attention is the environment.

In “Sleep No More,” where the audience freely walks in and out of 100 rooms, some say that viewers need to enjoy the performance at least 30 times in order to fully understand the story. However, the purpose of the performance is not storytelling, but rather how it pulls the audience into the world the play creates.

In an age where digital technology, artificial intelligence and virtual reality dominate society, people seek experiences where they can use all of their senses to enjoy themselves. This explains the popularity of immersive performances at a time when it has become easy enough to experience the thrill of bungee jumping or even rafting in the middle of a city using a single virtual reality headset.

Last year’s mega-hit Pokemon Go was a simple augmented reality game that garnered an explosive response from both children and adults alike, and satiated people’s desire to play a game that required them to move around and be a part of the action. The popularity of escape rooms, where players have to solve a series of quizzes to break out of a room, is another by-product of the demand for participatory content.

Felix Barrett, Punchdrunk’s founder and artistic director, said in an interview that it is crucial to make audiences feel that they are the most important person and to let them know that the more they move, the more they can discover.

According to the director of “The Show is Tomorrow, What Should I Do?”, providing a different experience for each person is important.

“We provide slightly different missions to provide the audience with a unique experience,” said Kim Tae-hyeong.

Since immersive performances usually can’t incorporate a large audience, its commercial viability in Korea is far from lucrative.

“One weakness of immersive performances is its low profits,” said Lee Je-seung. “Since it isn’t a familiar concept in Korea as of yet, the majority of audiences are made up of those who have participated many times. As the demand isn’t large enough, it is inevitable [to need] public institutions to invest in developing these types of performance,” Lee explained.

“From the planning phase, the two performances were designed to be staged at other theaters,” said Lee. “This could be helpful to local theaters that are suffering from lack of [creative] content,” Lee explained, and added that they could also contribute to revitalizing local culture.