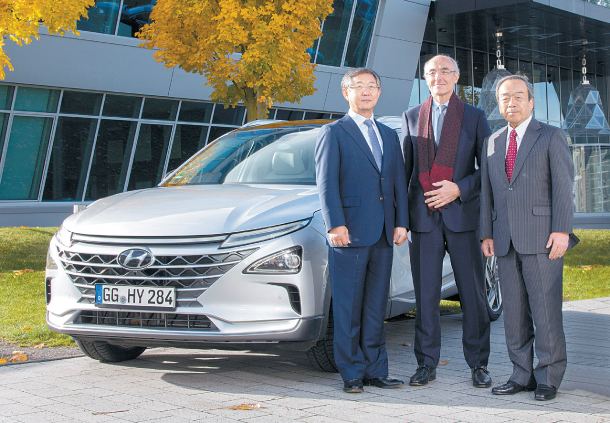 From left, Yang Woong-chul, vice chairman at Hyundai Motor, Benoit Potier, CEO of Air Liquide and Uchiyamada Takeshi, chairman of Toyota, pose for a photo at the second general meeting of the Hydrogen Council, held Monday in Germany. [HYUNDAI MOTOR]

Hyundai Motor has taken the helm of the Hydrogen Council as it hopes to take an upper hand in the fuel cell vehicle market that is quickly emerging as an alternative to internal combustion engines.

Korea’s No. 1 automaker said Tuesday that it has been chosen as the chair company of the Hydrogen Council, a global lobby group established in January this year to encourage a paradigm shift to an industry powered by hydrogen energy.

Hyundai Motor also said Yang Woong-chul, vice chairman of the automaker’s research and development department, was nominated as co-chairman of the council at its second general meeting held Monday in Bonn, Germany.

“To successfully achieve the Paris climate accord, a paradigm shift to hydrogen energy which doesn’t release carbon is required,” said Yang at the inauguration event. “In the face of a hydrogen-powered industry, one out of four to five cars in the world would be fuel-cell electric vehicle,” Yang explained.

According to an industry report issued by McKinsey and announced at the event, the hydrogen-powered vehicle industry will generate some $2.5 trillion in market value by 2050 and create more than 30 million jobs. It will affect not only the energy industry, but also influence transportation, construction and industrial materials.

The report further pointed out that hydrogen will account for nearly one-fifth of the total energy consumed by 2050.

Hyundai Motor has been focusing on fuel-cell electric vehicles, having launched the world’s first hydrogen fuel cell electric car for mass production in 2013.

The automotive company plans to unveil the model name of its next fuel cell electric vehicle and its core technology next year at the Consumer Electronics Show held in Las Vegas in January.