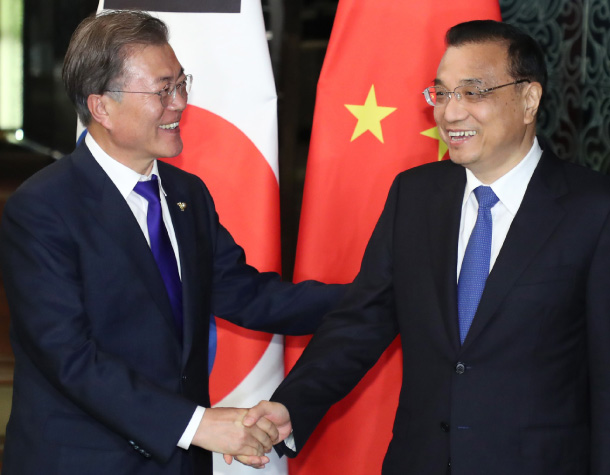 MANILA - President Moon Jae-in and Chinese Prime Minister Li Keqiang reaffirmed their efforts Monday to quickly normalize the countries’ ties soured by the deployment of a U.S. missile defense system in South Korea, while the Chinese premier noted a “bright” future for their bilateral relations.

“As they say one must sometimes take a step back to take nine steps forward,” Moon told Li in a bilateral meeting. “I believe we will be able to quickly develop the countries’ strategic cooperative partnership in the very near future if we work to turn our past difficulties into a chance and pool our wisdom.”

The meeting, the first of its kind, was held on the sidelines of the Association of Southeast Asian Nations (Asean) forum in Manila. It came two days after the South Korean president held a bilateral summit with his Chinese counterpart, Xi Jinping, in Danang, Vietnam, where they were attending the Asia-Pacific Economic Cooperation forum.

Seoul-Beijing relations have been at their lowest ebb due to China’s protest against the deployment of the Terminal High Altitude Area Defense (Thaad) missile defense system in South Korea.

For months, China enforced what many believed to be de facto economic retaliation against South Korea that included a ban on large group tours to South Korea and a range of non-tariff import barriers that effectively prevented shipments of many South Korean products, such as cosmetics.

The two countries agreed to normalize their ties in a joint statement issued by their foreign ministries on Oct. 31.

“I wish we will quickly put the China-Korea relations on the normal track through the joint efforts of the two countries,” he said through his interpreter, according to Blue House pool reports.

“I feel South Korea-China relations are now at a new starting line,” Moon told Li, according to Blue House pool reports. “I believe we have created a chance to quickly normalize the countries’ relationship through my talks with President Xi Jinping.”

The South Korean president expressed hope his talks with Li will further speed up the normalization of their ties.

He also proposed resuming high-level economic dialogue to discuss detailed measures to repair the countries’ ties, as well as their trade and economic relations.

“I wish my talks with you, prime minister, today will be a valuable chance to discuss specific ways to expand our cooperation on issues of mutual interest, and also normalize the countries’ practical cooperation in areas such as economy, trade and cultural, personnel exchanges that had been partially reduced over the past year,” Moon said.

The Chinese prime minister said the countries’ relations will continue to improve, though it may take time.

“Prime Minister [Li] said the countries will inevitably face sensitive issues as the China-South Korea relations develop, but that the development of practical cooperation between China and South Korea is very bright,” Yoon told a press briefing.

“I am confident about the China-South Korea relations because their [industrial] structures are strongly complementary,” Li was quoted as saying, adding a “new horizon” will open for the countries’ bilateral relationship.