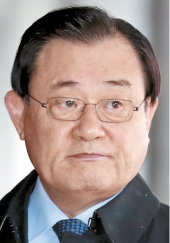 A former head of the National Intelligence Service was put under emergency arrest Tuesday morning over suspicions that Korea’s main spy agency routinely diverted money from its special operations fund to the Blue House during the presidency of Park Geun-hye.

The Seoul Central District Prosecutors’ Office said Tuesday that Lee Byung-kee was put under emergency arrest without a warrant at the end of a questioning session. “Taking into account various circumstances, we took him into custody,” said a prosecution source. “We will decide whether or not we will seek a warrant to further detain him.”

According to prosecutors, Lee was put under emergency arrest at 3 a.m. on Tuesday. The prosecution has been questioning him as a suspect since Monday.

Under criminal law, an emergency arrest without warrant is allowed when there are reasonable grounds that a suspect committed a crime punishable with more than three years in prison. The prosecution has up to 48 hours to hold the suspect without a warrant.

Lee served as director of the National Intelligence Service (NIS) from July 2014 till March 2015. Then he was appointed Park’s chief of staff.

The prosecution has been investigating suspicious transfers from the NIS’s special operations fund to the Blue House during the four years of the Park presidency. About 4 billion won ($3.58 million) was transferred, and Park’s long-time associates, Ahn Bong-geun, Lee Jae-man and Jeong Ho-seong, were accused of having collected the money. They are known as the three “doorknobs” who controlled access to Park during her presidency.

Ahn and Lee were arrested earlier this month in the scandal. Jeong is currently undergoing a criminal trial under detention on other charges.

In addition to Lee Byung-kee, two former NIS directors during the Park government, Nam Jae-joon and Lee Byung-ho, were questioned earlier this month. The prosecution on Tuesday asked a local court to issue warrants to detain Nam and Lee.

The prosecution said the NIS used to pay the Blue House about 50 million won a month under Nam’s leadership, and the monthly payment was increased to 100 million won after Lee Byung-kee became head of the agency.

According to prosecution sources, all three former NIS directors said the Blue House demanded the transfers and they complied.

Prosecutors will expand their investigation into former senior aides of Park to investigate the use of the funds. Park, currently standing trial for receiving bribes from conglomerates while in office, will likely be investigated in the scandal.

Of all the NIS directors under the conservative Lee Myung-bak and Park administrations, only Kim Sung-ho managed to avoid the prosecution’s investigations. Kim served as the NIS director from March 2008 through February 2009.

His predecessor, Won Sei-hoon, is currently undergoing trial for interfering in the 2012 presidential election by running a cyber smear campaign against then-liberal candidate Moon Jae-in. He was convicted of the crime by a high court, but appealed to the Supreme Court.

Throughout Korea’s political history, presidents appointed trusted figures to head the intelligence community, and many ended their careers in disgrace. The predecessor of the NIS was the Korean Central Intelligence Agency (KCIA) established in 1961. Former strongman Park Chung Hee created the agency, modeled after the Central Intelligence Agency in the United States, after he took power in a military coup. Kim Jong-pil, a former prime minister, was the first director of the KCIA.

Army generals who participated in Park’s military coup were appointed to head the KCIA. Massive powers were entrusted to them. Park was later assassinated by a KCIA director.

Perhaps one of the most turbulent careers of an intelligence director belonged to Kim Hyong-uk, who served in the post from July 1963 till October 1969. He was behind many fabricated anti-state cases whose victims were later cleared in retrials. After he lost a power struggle in 1969, Kim went into exile in the United States in 1973. He later testified in the U.S. about the Park regime’s cruelty and corruption. In 1979, he was lured to Paris by a KCIA agent and disappeared.

Kim Jae-kyu, appointed to head the KCIA in 1976, was executed for his assassination of Park in 1979.

Following his military coup in December 1979, Chun Doo Hwan headed the agency in 1980 for three months before he took the presidential office.

Chun renamed the KCIA the Agency for National Security Planning and military generals close to him were placed in top posts. Chang Se-dong, who headed the agency from 1985 to 1987, led many domestic political operations such as fabricated spy cases.

During the Kim Young-sam and Kim Dae-jung administrations, intelligence directors continued to face scandals. Kwon Young-hae, who headed the agency, was convicted of conducting a massive disinformation operation to prevent Kim Dae-jung from winning the 1997 presidential election.

The agency was renamed the NIS in 1999 and President Kim Dae-jung’s NIS director, Lim Dong-won, oversaw the implementation of the engagement policy toward the North. Lim and another NIS chief, Shin Kun, were detained over the NIS’s illegal surveillance operations in 2015.