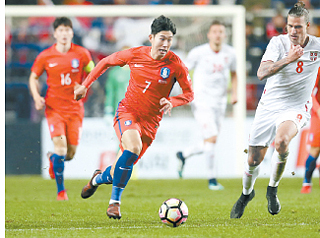 Son Heung-min of Korea dribbles the ball toward the goalpost in a friendly match against Serbia at Munsu Football Stadium in Ulsan Tuesday night. [YONHAP]

ULSAN - Korea played Serbia to a 1-1 draw in their men’s football friendly at home on Tuesday.

Midfielder Koo Ja-cheol scored an equalizer on a penalty for the 62nd-ranked Korea after Serbia, ranked 38th, opened the scoring in the second half at Munsu Football Stadium in Ulsan, some 410 kilometers (255 miles) southeast of Seoul.

This was the last friendly match at home for Korea this year. They have two wins, a draw and a loss against Serbia all-time.

Neither side generated much offense in the scoreless first half. Serbia had their first serious chance in the 20th minute when Sergej Milinkovic-Savic found some opening from the top of the box and fired a shot just wide of the left post.

Korean defense dodged a few bullets along the way, as center backs Jang Hyun-soo and Kim Young-gwon had trouble clearing the ball and committed a series of turnovers.

Then in the 27th minute, Jo Hyeon-woo made an outstanding stop to deny Adem Ljajic on a free kick attempt.

The Serbian midfielder took the spot kick just a couple of steps outside the box, and Jo dove to his right to punch the hard shot out of harm’s way.

The spectacular save did little to fire up the stagnant Korean offense. The attackers weren’t able to stretch the defense as they did against Colombia, and the transition offense that worked so well last week was nowhere to be found.

The best first-half chance for Korea came in the 43rd, when Son Heung-min deftly redirected a Kim Min-woo cross from left, only to be denied by Vladimir Stojkovic in the Serbian net.

Marko Dmitrovic replaced Stojkovic to begin the second half for Serbia, who withstood some early Korean challenges and broke the deadlock.

Ljajic, who was turned aside by Jo on that first-half free kick, got his revenge with a breakaway goal in the 59th minute.

Following a Korean giveaway, Serbia got deep into the offensive zone with just a couple of sharp passes. Milinkovic-Savic took the ball in the middle near the box, and then flicked a pass to his left and found wide-open Ljajic, who easily solved the Korean custodian with his right foot.

Right fullback Choi Chul-soon moved toward the middle to cover Milinkovic-Savic and ended up leaving a gaping hole on the left flank for Ljajic to exploit.

The hosts leveled the score just three minutes later. Koo Ja-cheol drew a penalty in the 61st, when he was pushed down by Jagos Vukovic, and stepped up to convert the kick himself the next minute to make it 1-1.

Son, who scored twice against Colombia, tested Dmitrovic in the goalkeeper’s first international match. First, it was on a 73rd-minute breakaway, and Dmitrovic got a piece of Son’s shot from the right wing.

Then nine minutes later, Son launched another hard shot from a few feet outside the box, and Dmitrovic frustrated the Tottenham Hotspur star once again with a diving save.

With the clock ticking down, Son had yet another chance on Dmitrovic on a breakaway. Lee Keun-ho set him up with a stretch pass from the Serbian zone, and Son fired a shot past a diving defender that Dmitrovic somehow kept out of the net.

Then in injury time, Dmitrovic turned aside Son’s hard volley inside the box to preserve the 1-1 tie.

Korean head coach Shin Tae-yong credited his players with battling their physical opponents “with grit,” and said they executed their game plan on the defensive end, turnovers notwithstanding.

“I think the players were able to earn confidence through the friendly matches,” Shin said. “Giving up just one goal to a superior team is pretty good. We’ll keep training without making big changes to our defensive line.”

After suffering through a horrendous stretch that led to Uli Stielike’s dismissal in June, Korea have played some inspired football in the last two contests as the FIFA World Cup nears.

The national team for that tournament will be announced next week. Korea typically name about a dozen players from overseas leagues for international matches. But the E-1 Football Championship isn’t on the official FIFA international calendar and European clubs, who will be in the middle of their seasons in December, aren’t obliged to release their international players. That will leave Shin to scramble for available players from Korea and other parts of Asia.

Korea will wrap up the year with those three matches against regional opponents, and hold a two-week training camp in January overseas.