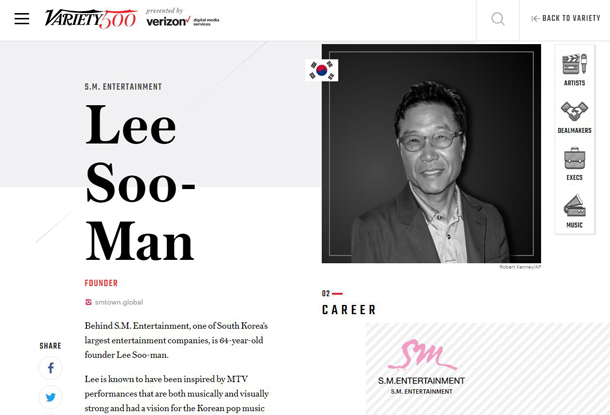 Lee Soo-man, founder of S.M. Entertainment, was named to the “Variety 500,” a listing of the most influential business leaders, published by U.S. entertainment industry magazine Variety on Wednesday.

Variety introduces Lee as “a moderately successful folk singer between 1972 and early 1980s, though his real talent proved to be producing.” Then, it introduces many of successful singers he launched, including Korea’s first idol band H.O.T., Girls’ Generation, Exo and many more.

Joining Lee on the list are Bob Iger, chairman of Walt Disney Company, Robin Li, CEO of Baidu, singer Adele, and others. The United States had the most “influential business leaders” on the list, with 362 people. Twenty-eight were from the United Kingdom and 20 were from China.