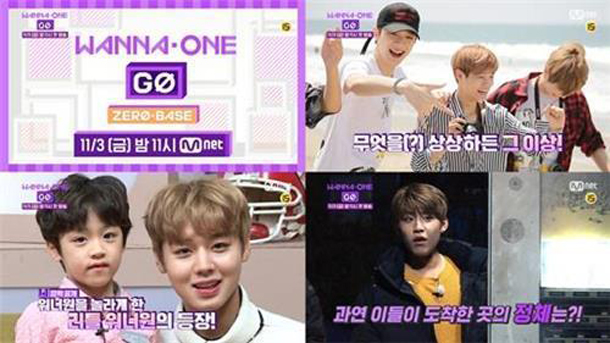 The second season of reality show “Wanna One Go” rose to the top of the local weekly TV ratings, data showed Wednesday. Following up on the show’s first season, aired in August, “Wanna One Go: Zero Base,” which premiered Nov. 3, garnered a score of 243.6 on the Content Power Index (CPI) for Oct. 30 to Nov. 5.

The eight-episode series shows a more up close and personal side of the 11 winners of the popular audition program “Produce 101,” as well as behind-the-scene stories, music cable channel Mnet said.

KBS2’s weekend drama “My Golden Life” starring Park Si-hoo and Shin Hye-sun shared the top honor with the reality show. The series, the highest-rated TV drama so far this year, revolves around a woman who dramatically rises up the social ladder by lying about her true identity.

SBS TV’s variety show “Master Key” ranked eighth with a score of 223.6, one step higher than the previous week, and featured popular idols from Exo, Wanna One and EXID. The index, created by CJ E&M and Nielsen Korea, measures the level of popularity and influence on consumer behavior of all entertainment TV programs aired on major territorial networks and cable channels during prime time.