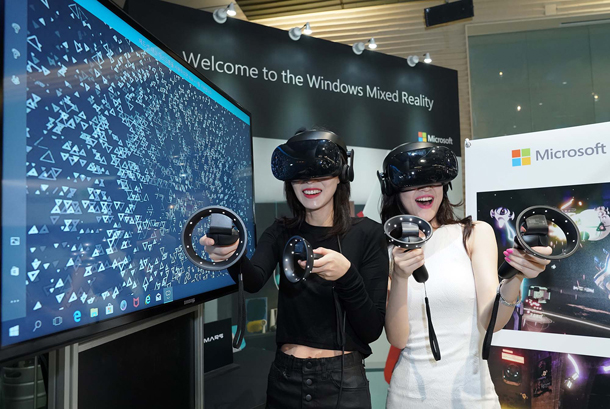 Samsung Electronics and Microsoft unveiled their first mixed reality (MR) headset in Korea on Wednesday, teaming up in a bid to revolutionize the working environment in a wide range of industries.

The device, dubbed the Samsung HMD (head mounted display) Odyssey for PCs, will officially launch on the Korean market on Nov. 21 with a price tag of 790,000 won ($715.49), affordable compared to previous Microsoft MR devices like HoloLens, which cost over $3,000.

MR, simply put, encompasses everything from augmented reality (AR) to virtual reality (VR) and any combination of the two. According to Microsoft, the technology spans everything in between the physical world and the digital world.

AR is technology that provides a composite view of the real world with computer graphics laid over it. VR differs from AR in that it takes users into a completely immersive computer generated world, as opposed to layering images over reality.

“We hope to enlarge the overall ecosystem for the mixed reality market with the release of our latest devices,” said Chang Hong-kook, marketing and operations lead at Microsoft Korea. “The device enables researchers to collaborate with other researchers on the other side of the world … and test health care products even without having the entire physical infrastructure.”

According to Chang, Microsoft’s MR technology has already been put to use by carmakers Ford and Volvo. At Ford, designers can adjust the color or design of a car’s side mirror right away through the MR view, making the overall design process more efficient.

While these companies have been using Microsoft’s HoloLens, a holographic MR device released by the company two years ago, the new device with a lower price tag and more VR features is expected to be used in broader business areas including gaming, entertainment and education. The device is also easier to use at home, Chang said.

Another special feature of the new device is that it is easier to use. As sensors are embedded in the headset itself, users don’t have to install sensors separately. By simply connecting the headset via one HDMI and USB to a Windows 10 enabled PC, the MR experience can begin - though PCs have to meet a certain standard to handle the high-quality MR content.

Currently, the headset is more premium VR than MR, as it is not yet really capable of any functions unique to the latter device. However, unlike normal VR devices, customers are able to multitask inside the digital world.

While Samsung and Microsoft have joined forces on MR, a Samsung spokesperson made it clear that the electronics company is maintaining its existing partnerships with Google and Oculus.