Blue House to ask for approval of Hong’s confirmation report

Blue House to ask for approval of Hong’s confirmation report 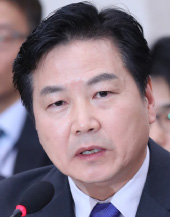 The Blue House said Wednesday it will ask the National Assembly to approve a confirmation hearing report for a controversial nominee to head the Ministry of SMEs (Small to Medium-sized Enterprises) and Startups.

“We will ask the National Assembly today to endorse its confirmation hearing report of Hong Jong-haak within six days,” a presidential official said. That will give the legislature until Monday to send the report to the Blue House.

The National Assembly held the confirmation hearing last week, but failed to reach an agreement to accept President Moon Jae-in’s pick for minister. Tuesday was the deadline for the legislature to conclude a report on the hearing and send it to the Blue House, but the ruling and opposition parties failed to make it.

Hong, a former lawmaker of the ruling Democratic Party and a liberal economist, was nominated to the post last month, but he faced a barrage of criticism from opposition parties over the controversial transfer of assets among his family members.

Sources said Moon planned to sign off the request to the legislature after returning to Korea Wednesday afternoon from his eight-day trip to Southeast Asia.

If the National Assembly does not endorse the confirmation report by Monday, Moon can take necessary steps to formally appoint him.

Under the law governing the confirmation hearing, the National Assembly must end the process within 20 days after a motion to confirm a nominee to a public post is submitted. If the legislature fails to do so, the president can request that lawmakers complete the process by assigning a new deadline within 10 days. If the lawmakers still fail to do so, the president can go ahead and make an appointment.

The confirmation motion for Hong was submitted to the National Assembly on Oct. 26.

If Moon bypasses opposition lawmakers and confirms Hong as the venture minister, Hong will be the fifth senior official in the Moon administration to be appointed without the National Assembly’s confirmation. Others are Kim Sang-jo to head the Fair Trade Commission, Kang Kyung-wha to head the Foreign Ministry, Song Young-moo to head the Defense Ministry and Lee Hyo-sung to chair the Korea Communications Commission.

If Hong is formally appointed, he will fill the final vacancy in Moon’s inaugural cabinet. Moon took office in May without a transition period following a snap election victory. The Ministry of SMEs and Startups was created in June as a part of Moon’s ambition to create jobs by improving support for small companies.

The move, however, will likely add a political burden to the ruling party and the administration for other appointment plans and budget passage. The Democratic Party only controls 121 seats in the 299-member National Assembly, and cooperation of opposition lawmakers, particularly the centrist People’s Party, is crucial.

“When Moon pushed ahead with appointment of Foreign Minister Kang, nomination of Kim Yi-su as the head of Constitutional Court was rejected in the aftermath,” Rep. Choi Myung-ghil of the People’s Party said Wednesday in an interview with YTN. “So, there will be negative affects on passing other bills including the budget proposal.”

Although Choi did not directly link the appointment of Hong and the budget bill, he hinted that the two cannot be seen as completely separate matters.

“I want to make clear. The People’s Party will not link the budget bill with the fate of Hong,” Kim said. “But I can’t stop each and every lawmaker for being upset.”

In addition to the budget bill, the Moon administration needs the support of the National Assembly to confirm a Constitutional Court nominee and name a new head of the Board of Audit and Inspection.