After 2 years, Jo finally gets to play

After 2 years, Jo finally gets to play 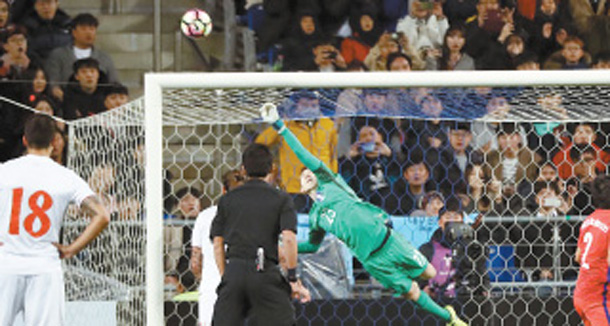 Jo Hyeon-woo, in green, makes a save during a friendly match against Serbia at Munsu Football Stadium on Tuesday. [YONHAP]

It took two years for Korea’s number “0” to become the team’s No. 1. Upon completion of the season’s last friendly match against Serbia at Ulsan Munsu Football Stadium on Tuesday, the national football team’s goalkeeper Jo Hyeon-woo was certainly the star of the show, appearing for Korea for the first time despite two years in the squad.

Jo was selected to be Korea’s starting goalkeeper and protected the goal throughout the 90 minutes. Though it was November 2015 when Jo was called up to the squad, Tuesday was his very first time playing in a match, having kept the bench warm while foreign league goalkeepers got the nod - Kim Seung-gyu of Vissel Kobe, Kim Jin-hyeon of Cerezo Osaka, Kwon Sun-tae of Kashima Antlers and Jung Sung-ryong of Kawasaki Frontale.

And when Jo was finally given the opportunity, he didn’t let go of it, blocking off a number of goal attempts from Serbian strikers. During the 27th minute, blocking Serbian midfielder Adem Ljajic’s free kick was one of the highlights of the match.

“[Jo Hyeon-woo] doesn’t have any experience in international matches, but I was sure about his ability,” said head coach Shin Tae-yong after the friendly. “And he played a lot better than I expected.”

One good match was good enough for Jo to become a new football star, as a lot of people recognized him and cheered him when he headed back to his club, Daegu FC.

“I lived my entire life as a football player, but I never experienced this,” Cho told the JoongAng Ilbo, an affiliate of the Korea JoongAng Daily, on Wednesday. “I realized how much attention the national team receives.”

Despite Shin’s compliment on Jo’s performance, Jo said he would only give himself a score of 50 out of 100 from Tuesday’s match, for not making aggressive decision in the right situations.

“I continuously thought about the goal I gave away in the 59th minute,” Jo said. “If it was a K League match, I would have been more aggressive, but I stepped back for a moment, telling myself to be more careful. I learned a lot from that goal. Some senior players said their debut match went by really slow, but I felt like my 90 minutes went by too quickly. I’m just happy that I got to play on the field with players who are way above my level.”

Now that Jo finally made his debut, he set two goals for the winter - winning a spot once again as the Korean national football team’s goalkeeper during the East Asian Cup in December and to win the K league Classic’s best goalkeeper title.

He believes that playing in the East Asian Cup is a must in order to prove that he is a reliable option for the FIFA World Cup in Russia.