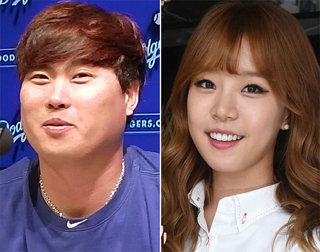 Ryu Hyun-jin of the Los Angeles Dodgers, left, and sports reporter Bae Ji-hyun, right, are getting married on Jan. 5 at Hotel Shilla in central Seoul, according to A-Spec Corporation, Ryu’s agency.

In September, the reporter’s agency Koen Stars announced in the statement that the two were considering getting married at the end of the MLB season. The couple has been dating for about two years, and got close while working together.

In an interview held after Ryu arrived at Incheon International Airport last Wednesday, he revealed that, “Bae and I will prepare for the wedding together.”

Ryu has been playing for the Los Angeles Dodgers since 2012, and entered the professional Korean baseball league in 2006, playing for the Hanwha Eagles. Bae has worked as a sports news announcer for SBS ESPN, SBS Sports and MBC Sports Plus.