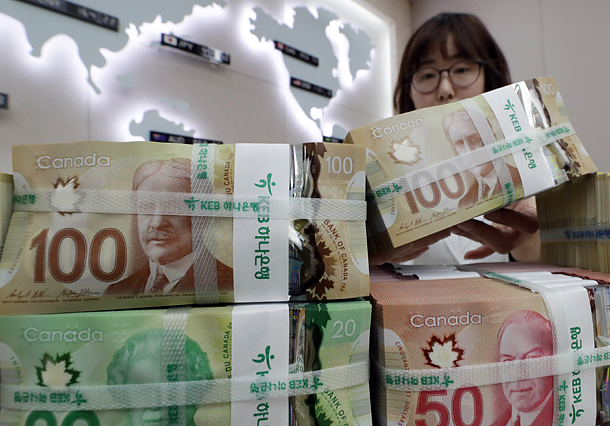 A worker at the headquarters of KEB Hana Bank checks Canadian dollars and the Korean banknotes on Thursday in central Seoul.[YONHAP]

Korea and Canada signed a currency swap agreement on Thursday offering liquidity support to both countries’ financial markets in times of crisis.

Bank of Korea Governor Lee Ju-yeol and his Canadian counterpart Stephen S. Poloz signed the deal at the Bank of Canada’s head office in Ottawa, according to the Bank of Korea.

The arrangement, effective immediately, comes without any ceiling on maturity dates or amounts.

The Bank of Korea called the agreement a major milestone since the Canadian dollar’s status as a key currency can help ensure financial stability in any future crisis.

“We have been discussing this for several months, but managed to make progress recently,” said Lee Ju-yeol, governor of the Bank of Korea.

“[The Bank of Korea] carried forward the deal because a currency swap with a key currency country could act as a safety net against financial instability,” Lee said.

Alongside the U.S. dollar, pound, yen and euro, the Canadian dollar is one of the most traded currencies, and is used as a reference in international transactions.

Finance Minister Kim Dong-yeon acknowledged that this was the first time Korea entered a currency swap agreement without any limits on size or maturity.

“Six key currency countries have swap arrangements that set no limits on amount and durations of the deals,” the minister said.

“But for Korea, this is the first time.”

The six countries Kim referenced include the United States, Japan, Britain, Switzerland and the Eurozone as well as Canada.

Such a standing agreement is believed to provide more robust stability compared to an arrangement with specific terms, according to Governor Lee.

“Since it has no maturity, we don’t need to renew it on a regular basis,” Lee continued, “and the size will be decided after discussions. But since it [the agreement] is intended to strengthen financial stability, the underlying consensus is that the amount will be sufficient.”

The Bank of Canada also lauded the accord.

“This effectively enables the Bank of Canada to provide Canadian dollars to the Bank of Korea and to provide liquidity in Korean won to financial institutions in Canada, should the need arise,” it said in a statement.

“Likewise, the Bank of Korea can provide Korean won to the Bank of Canada, as well as provide liquidity in Canadian dollars to financial institutions in Korea.”

The announcement follows the renewal of a swap agreement with China last month that was worth $56 billion over a three year term.

Korea currently has currency swaps worth around $120 billion.

The partner countries include Indonesia ($10 billion), Australia ($7.7 billion) and Malaysia ($4.7 billion). Korea also belongs to the Chiang Mai Initiative, a multilateral currency swap arrangement that is $38.4 billion in size.

Other participating countries are the ASEAN member nations, China and Japan.