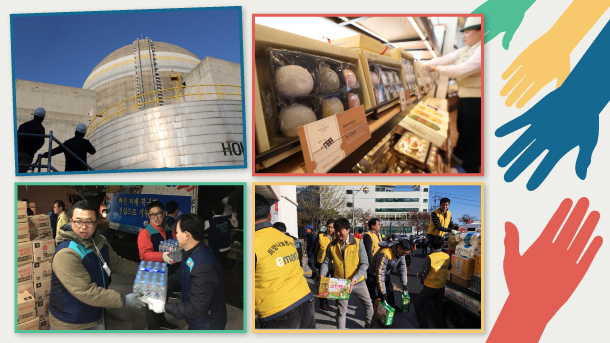 From top left, clockwise: Employees inspect a nuclear reactor in Busan on Thursday to check for any damage from the earthquake. A bakery employee in Seoul displays rice cakes that are usually given to students taking the CSAT for luck. Usually these products are withdrawn the day after the test, but this year the bakery has extend the sales. Emart employees also delivering supplies to people affected by the earthquake at its Pohang branch on Thursday. Employees from GS25’s Pohang office deliver relief goods to a shelter in Pohang’s Heunghae neighborhood, on Thursday. [YONHAP, GS25, EMART]

The second-biggest earthquake to hit the Korean Peninsula is doing more damage than shattering building facings and breaking windows. The aftershocks are being felt by both the retail and tourism industries.

The College Scholastic Aptitude Test (CSAT), which is traditionally administered on the second or third Thursday in November, is a major event for those two industries. High school seniors, their families and friends celebrates the climax of the college admission process by going to fancy restaurants and amusement parks and even take trips. All those plans came to screeching halt after the government late Wednesday announced it was postponing the exam for a week because of safety concerns in the quake’s wake.

Three leading department stores - Lotte, Shinsegae and Hyundai - all delayed discount and promotional events offered to students who show test identification slips. They had planned to offer around 30 percent off on clothes, cosmetics and in their restaurants for this year’s test-takers.

However, department stores are still discussing whether to shift dates for special events organized for the season such as concerts, sessions on college application strategies for parents and makeup classes for future college students.

“Discussions are underway but events that are directly related to the CSAT, like application strategy sessions, are likely to be moved,” said a Hyundai Department Store spokesman.

The tourism industry was shoved into even more chaos. Tour agencies and airlines face waves of cancellations from families that planned on trips immediately after the exam. This will set in motion a complicated cascade of refunds and cancellation charges.

A general response announced by major tour offices and airlines on Thursday was that they would waive cancellation or change of schedule charges for reservations made after the original CSAT date.

Only test takers and relatives traveling with them will be offered the waivers. Students canceling or postponing reservations will have to submit a CSAT identification slip.

Their relatives will have to submit an official document issued by a community center proves relation to the student.

Hana Tour will waive cancellation fees for families that planned to embark before Nov. 30 if they make the request before Monday. Mode Tour and Interpark Tour released similar plans to allow free-of-charge refunds or schedule changes for a test-taker and one family member.

KLM Air France, a local office of the France-based airline, decided early Thursday to exercise its rights as a domestic branch in waiving cancellation fees before waiting for its headquarters’ approval.

Instead of the usual festive promotion events after the CSAT, retailers were quick to show support for Pohang City residents after the earthquake hit. The second most severe earthquake in Korean history damaged roads and buildings, prompting over 1,500 people to evacuate their homes. Convenience stores were the first to come offer support.

On Wednesday, CU, GS25 and 7-Eleven delivered relief goods including food, blankets and daily necessities like toothbrushes and paper cups to shelters in badly affected neighborhoods.

Retail conglomerates Shinsegae, Lotte and CJ jumped on the bandwagon to offer supplies.