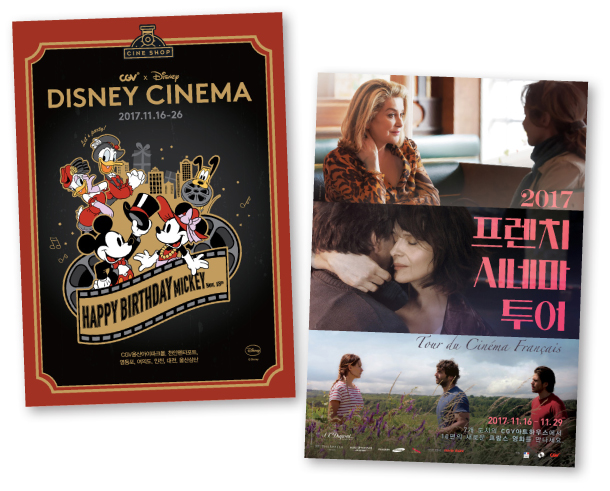 A series of French movies and Disney films will become available in local cinema over the next week.

French Cinema Tour 2017, which kicked off yesterday, will unveil a total of 10 French movies unscreened in Korea at nine CGV Arthouses nationwide until Nov. 29.

The event is co-hosted by the Embassy of France in Korea, Unifrance and CGV Arthouse, which is operated by Korea’s largest cinema chain CJ CGV. Actress Han Ye-ri has been selected as an honorary ambassador.

Comedy-drama “Back to Burgundy,” French auteur Roman Polanski’s latest thriller “Based on a True Story” and Japanese horror maestro Kiyoshi Kurosawa’s French-language fantasy tale “The Woman in the Silver Plate” will also be screened.

For those looking to meet French cineastes, “Back to Burgundy” director Cedric Klapisch and female star Ana Giardot have visited Korea to hold special events with the local audience.

The movies will be screened at nine cinemas nationwide, including in Yongsan, central Seoul and Yeouido, western Seoul.

Products related to the disney characters will be available in the cinema’s Cine Shop.