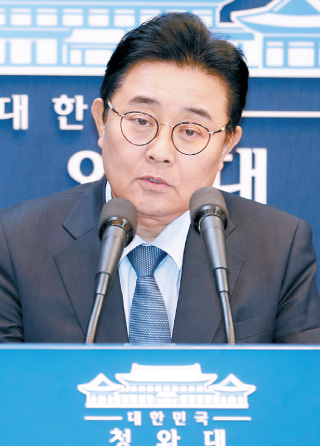 The 59-year-old, who formerly served as a lawmaker representing Dongjak District, southern Seoul, pled innocence while solemnly announcing his resignation to Blue House correspondents. He said he was stepping down because he didn’t want to “burden” the president, whose full attention was needed to serve the people.

“I tried my best to assist the president as his senior secretary for political affairs despite my short period [in the job], but I’m utterly devastated now that I became a burden” to him, Jun said.

Jun apologized for his former aides’ “aberrant acts,” but stressed he was never involved in any transgression. He said he devoted his entire life to promoting Korea’s e-sports industry and combating social prejudices against it.

Jun vowed to “actively respond” to any chances to clarify the truth, and said he hoped that rumors about him will be put to rest in the near future.

It is not known whether Jun’s decision was voluntary, but a senior Blue House official who spoke on the condition of anonymity hinted he was pressured to step down because the overall “atmosphere” in the presidential office was that it would be difficult for Jun to be cleared of any charges.

Prosecutors said Wednesday that “the progress of the probe is making it inevitable” to question Jun, the biggest hint so far that the former secretary could have been involved. A specific timeline for questioning him wasn’t mentioned.

Earlier Wednesday, the Seoul Central District Prosecutors’ Office applied for a detention warrant for the secretary general of Kespa, accusing him of helping Jun’s former aides pocket around 110 million won ($99,880) out of the 300 million won worth of donations made to the association by Lotte Homeshopping in 2015.

At that time, the aides were working as secretaries for Jun, who in addition to his role as a lawmaker, served as chairman of Kespa. At the National Assembly, Jun was a member of the Future Planning, Broadcasting and Communications Committee, which had considerable influence over the government’s decision to renew business licenses for home shopping channels.

Lotte Homeshopping donated 300 million won to Kespa shortly before its business license was renewed for three years by the Ministry of Science, ICT and Future Planning. Prosecutors are wondering whether the cash was in return for favors from Jun, who led Kespa from January 2014 to last May.

Prosecutors believe Jun’s two secretaries and a broker, who are all now in pre-trial detention, pocketed one-third of the Lotte donation.

Rep. Back Hye-ryun, spokeswoman of the Democratic Party, said in a terse statement Thursday that the ruling party “respected” Jun’s offer to resign. Another party member who asked not to be named said the party would wait for more details from the prosecutorial probe to say anything further.

Rep. Jun Hee-kyung, spokeswoman of the main opposition Liberty Korea Party, said that “a part of the Moon Jae-in administration’s true nature has been exposed,” pressing authorities not to take the issue lightly.

Rep. Son Kum-ju, a spokesman of the People’s Party, said he looked forward to seeing the Moon administration treating the president and his aides more “rigorously” when it came to “rooting out social evils.”