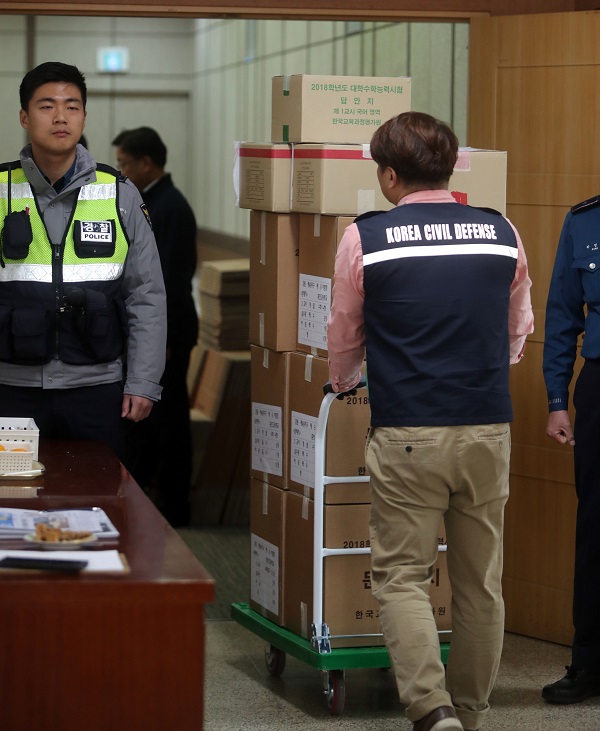 Following the earthquake in Pohang Wednesday, which led to the postponement of the CSAT by one week, officials return exam papers that had been dispatched to test locations to the Chuncheon Office of Education in Gangwon on Thursday morning. [YONHAP]

After the Ministry of Education postponed the College Scholastic Ability Test (CSAT) by a week to next Thursday, citing safety worries after an earthquake in the North Gyeongsang city of Pohang, universities also postponed their individual admission essay tests, which follow the CSAT. Authorities heightened security at local education offices that hold the test materials.

The 5.4-magnitude quake that hit Pohang Wednesday destroyed some 1,000 houses, forcing some 1,500 people out of their homes, and injured at least 57 people as of Thursday morning. The original CSAT date was Thursday, Nov. 16.

“The education office in Pohang requested the government postpone the CSAT,” said Minister of Education Kim Sang-gon in a press briefing on Wednesday night. “The ministry decided to postpone the test given concerns for the safety of the students.”

Just before the announcement, there were some 20 posts on the Blue House website reportedly written by students asking for postponement of the CSAT, complaining they were “too nervous” to take the test under the current conditions.

The ministry said many of the 14 test centers in Pohang were damaged after the quake. As of Thursday afternoon, at least 45 aftershocks hit the city.

Given the importance of the CSAT to Korean students and the strong chances of cheating, it is impossible to postpone the national test in just one city or region.

Universities, which conduct individual essay tests for admissions after the CSAT, are responding to the date change by delaying their tests by a week.

Universities including Kyung Hee, Yonsei, Sungkyunkwan and Sogang were originally to hold their essay tests this weekend, and others including Ewha Womans, Chung-Ang and Hanyang universities were holding theirs next weekend.

All essay tests at universities in Korea have been postponed by a week, the Education Ministry said.
Students will receive their CSAT results Dec. 12. The original date was Dec. 6.
With the delay in the CSAT, authorities have strengthened security at local education offices storing the test materials.

“Four police officers are taking turns guarding the test materials and answer sheets 24/7 here,” said a police officer at an education office in Seoul on Thursday.

Two officers were standing in front of the room containing the materials, while a security guard checked a computer monitor which showed CCTV camera footage of the inside of the room. After 12 hours, the two officers rotate duty with two other officers.

The situation was similar at an education office in Jeonju, North Jeolla, on Thursday.
Two police officers and four government officials were taking turns guarding the room in an office that holds the test materials.

“We’ve been guarding the materials day and night since Tuesday,” said an official of the North Jeolla Education Office, which stores the test materials for 20,557 students to take the test at centers throughout North Jeolla next Thursday. “We don’t mind being sleepless for days because what we’re doing is of national importance.”

Korea has postponed the CSAT before, but it was a few months before the test date. In 2005, the government postponed the test from Nov. 17 to 23, because the Asia-Pacific Economic Cooperation summit was taking place in Busan on Nov. 18 and 19.

In 2010, the government postponed the CSAT from Nov. 11 to 18 because the G-20 summit was being held in Seoul from Nov. 11 to 12.
The announcements for those date changes came at least nine months before the test dates.