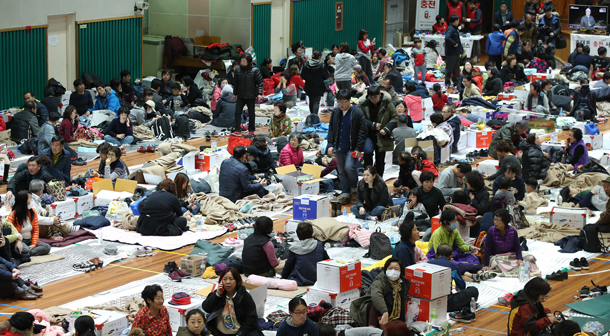 Hundreds of displaced residents of Pohang, North Gyeongsang, at a gym in Heunghae town on Thursday, after the 5.4-magnitude earthquake hit the city on Wednesday and forced some 1,500 out of their homes. [YONHAP]

After the 5.4-magnitude earthquake in Pohang, North Gyeongsang, displaced some 1,500 people Wednesday, hundreds filled the gym in the city’s Heunghae neighborhood and spent a sleepless night as dozens of aftershocks continued to hit the area.

“My two daughters and I came here because we thought it’d be safer than being home,” said Park Sun-hee, a 47-year-old resident of Pohang. “We have no idea what will happen from here.”

“I feel like my heart drops every time I hear something loud,” said a 77-year-old surnamed Kim. “I don’t know what to do anymore.”

The quake in Pohang, the second-strongest to ever hit Korea, destroyed some 1,000 houses, forcing some 1,500 people out of their homes, and injured at least 57 people as of Thursday morning. As more than 30 aftershocks hit the gym during the night, many spent it sleepless. The sounds of babies crying and those waking up screaming whenever a tremor could be felt filled the gym.

“Some 30 older adults at the gym came up to us during the night asking for medicine to help them calm down,” said Lee Moon-hyung, a 46-year-old pharmacist who also spent the night in the gym. “They were complaining of chest pains and nerves. We brought our medicines here after hearing that some pharmacies in the area were damaged due to the quake.”

There were some volunteers at the gym handing out cup noodles.

“I live in Seoul but my university is in the area,” said Lee Seul-gi, a 21-year-old student. “I came here after being told to evacuate to this gym and decided to help out as a volunteer after seeing that people needed help. I hope a warm cup noodle will help cheer them up.”

“I just wanted to help out with what I could do,” said Cho Yeong-hae, a 57-year-old volunteering at the gym. 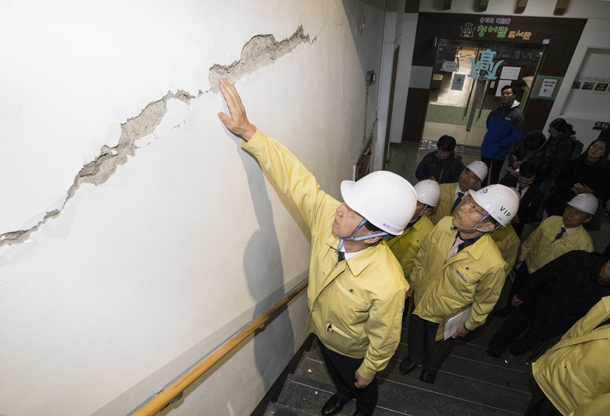 “All of our 18 employees of the Pohang branch office are here,” said Park Jung-hyun, a sales team director of GS Retail. “We just wanted to help out people in need.”

A few hundred officials of Pohang city government also spent the night at the gym, responding to queries from the evacuees.

The 5.4-magnitude quake in Pohang on Wednesday afternoon was followed by at least 45 aftershocks by Thursday afternoon, ranging from 2.0 to 5.0 in magnitudes.

“We do not know for how long the aftershocks will continue,” said Woo Nam-cheol, a geologist at Korea Meteorological Administration (KMA). “But we could expect it to continue for months, given that was the case in previous quakes.”

The 5.8-magnitude earthquake that hit Gyeongju, North Gyeongsang, on Sept. 12, 2016, was followed by more than 80 aftershocks larger than 2.0 magnitude in the first 24 hours. Gyeongju experienced a total of 605 aftershocks for seven months, until April 12.

“The aftershocks in Gyeongju persisted for a period longer than what is usual for quakes,” said Kyung Jae-bok, professor at Korea National University of Education in North Chungcheong. “In Pohang’s case, I think you can expect some four to five months of aftershocks.”

The possibility of another strong one coming is not completely ruled out, some experts said.

“Remember in Gyeongju, a 4.5-magnitude quake hit the city a week after the initial quake,” Kyung said. “It could happen to Pohang, too.”

“Pohang, Gyeongju and Ulsan could take a hit by a quake as large as 7.0 in magnitude,” said Son Moon, a geology professor at Pusan National University in Busan, in an exclusive interview with JoongAng Ilbo. “Korea is no longer safe from earthquakes and it is more likely to experience a big quake in the future.

“This is because Korea is geologically located at a place where a 7.0-magnitude quake can hit every 500 years or so,” he added. “It’s been some 400 years since such a large quake hit the country.

The fault zones are moving underground and they are increasingly under pressure and a big quake could break out of these movements soon.”

Son warned people to remain wary in the next few days.

“We do not know yet if the quake in Pohang on Wednesday was a foreshock of another one to come,” he said. “We will know for sure in two to three days. Remember last year in Kumamoto, the 6.5-magnitude quake was followed by a 7.3-magnitude quake in two days.”

Finance Minister Kim Dong-yeon said Thursday that the government is looking into designating Pohang as a special disaster zone after reviewing the damages caused by Wednesday’s earthquake.

“While the CSAT has been delayed due to the Pohang earthquake, the economic team is closely monitoring the situation,” Kim said. “We will provide fiscal spending so that Pohang residents can continue with their livelihoods while providing additional aid if it is needed.”

Although President Moon Jae-in held a special meeting at the Blue House in regards to the earthquake, there were no discussions over whether Pohang should be designated as a special disaster zone.

Once designated, the area receives government help in the form of financial and fiscal aid, as well as tax breaks. Gyeongju, which was shaken by the biggest earthquake ever recorded on the Peninsula with a 5.8 magnitude last year, received 8.9 billion won ($8.09 million) from the government.