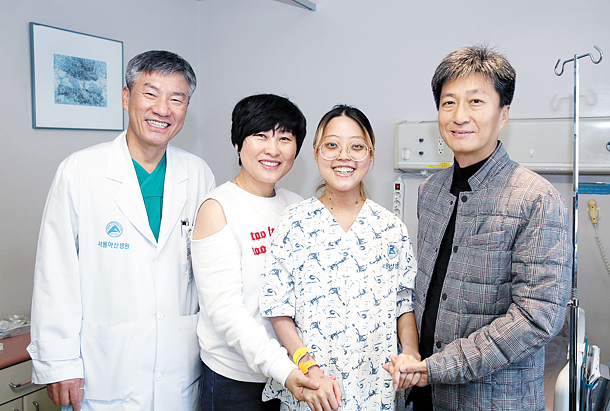 “Before the surgery, I couldn’t even walk three steps because I would be out of breath,” said Oh Hwa-jin, the 20-year-old patient. “Now, I feel as though I am reborn.”

The operation, which took place on Oct. 21, used the lungs of non-brain-dead donors, which is usually proscribed by law.

Oh was diagnosed in 2014 with pulmonary hypertension, a rare disease whereby the patient’s pulmonary artery grows thicker due to high blood pressure in the lungs, making blood circulation difficult. If left untreated, the disease could lead to heart failure.

About 50 medical workers from over four different departments took part in the surgery. Doctors said there was less than a 70 percent survival rate for the surgery, but the patient recovered with no post-surgery complications or transplant rejection.

The hospital, located in Songpa District, eastern Seoul, reported that the patient’s heart stopped beating last year July, and was in danger of facing another heart attack. Under the nation’s Organ Transplantation Act, kidney, liver, bone marrow, pancreas and insulitis transplants are the only surgeries that are permitted to use non-brain-dead donors. The hospital explained that Oh would have had to wait four years to receive a donation from a brain-dead donor.

The Ministry of Health and Welfare approved Oh’s surgery in a committee meeting, after Oh Seung-taek, the patient’s father, filed a petition on e-People, the Anti-Corruption and Civil Rights Commission’s online portal, for the government to permit the use of a non-brain-dead donor’s lungs in the surgery.

“I can give up both my lungs in order to save my child,” he pleaded. “There isn’t much time left. Please allow the living donors surgery.”

Kwon Jun-wook, an official from the ministry’s Bureau of Public Health Policy, said the government is also considering amending the Organ Transplantation Act to include lung transplant surgery.

Asan Medical Center said that out of its 68 patients signed up for lung donations from 2014 to 2017, 32 died while waiting for donations from brain-dead donors.

The hospital, however, said that the success of the surgery may help the 300 or so patients awaiting lung transplants within the nation to receive surgery faster.

Pointing to the successful recovery of the patient, cardiovascular and thoracic surgeon Park Seung-il, who led Oh’s surgery, urged that the government “must approve lung transplant through non-brain-dead donors as a legal procedure.”

The United States and Japan have both approved the use of non-brain-dead donor surgery, and Japan has been carrying out the surgery for 10 years, with a five-year survival rate of 89 percent.

Park, however, warned that the surgery may not be safe for those with lung cancer, and may only be suitable for those suffering from pulmonary fibrosis, pulmonary emphysema, pulmonary hypertension, bronchial asthma and airway obstruction.