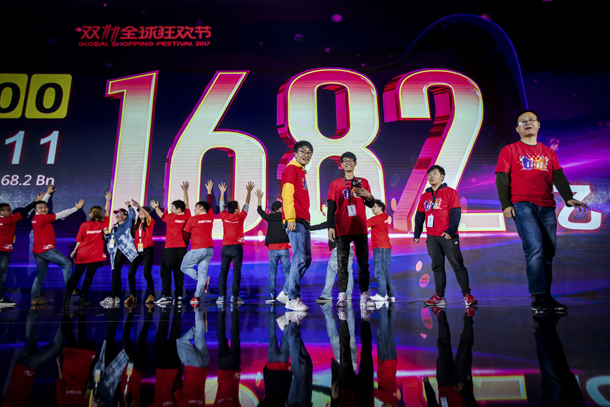 Employees of China’s largest e-commerce giant Alibaba Group cheer near a screen showing the amount of money that consumers have spent after the conclusion of the “Singles’ Day” global online shopping festival in Shanghai, China, on Nov. 12. [AP/YONHAP]

China’s economic prowess has become entirely different. It is full of new dynamics. The confidence in navigating and generating growth in the economy has changed the behaviors of Chinese people. They have become more relaxed and civil. The upgrade in living conditions changed the ways and lifestyles of Chinese. I was impressed by the sight of Xiamen, a port city in southeastern Fujian, China, along the Taiwan Strait, in my recent visit. The high-rises along the port commercial districts could have been found in any big metropolis. Shops were neatly designed and public toilets were clean. Even street cart food in alleys looked appealing.

The changes do not stop with Xiamen. The harbor city is one of the latecomers to urban development. The port city was among the first four special economic zones along with Shenzhen, Zhuhai, and Shantou in Guangdong Province under a Deng Xiaoping-led policy initiated in 1978. Yet development was delayed due to geopolitical risk because of its proximity to the Jinmen or Kinmen Islands of Thailand that lie less than 4 miles away.

Development gained impetus under President Xi Jinping, who has a personal attachment to the strategically important harbor city in economic and security terms. He built his political career as the deputy mayor of Xiamen in 1985, moving on to head Fujian and Zhejiang Provinces and Shanghai.

Xi pronounced a new opening and growth design for China at the recent party convention where his second five-year term was reaffirmed. He envisions making all Chinese citizens middle class by 2020 and the economy the world’s biggest by outpacing the United States in 2050. From the ongoing transformation in Xiamen, the dream does not look too far-fetched. Anyone who has been to China recently would agree on the renewed vitality in the Chinese economy.

China no longer is simply described as the world’s biggest industrial base. It is not just a manufacturing powerhouse. The market is the largest consumer market with advanced service sector and ICT capabilities. It leads in the technologies of the fourth industrial revolution. China’s manufacturing capacity overwhelms Korea’s. Samsung smartphones sell pitifully in the Chinese market dominated by domestic brands. Hyundai and Kia Motors cars struggle amidst aggressive expansion by Chinese makers.

It may not be long before China catches up with Korea in chip-making. The country’s first national memory base in Wuhan East Lake High-tech Development Zone begins mass production next year. Under a state-backed program, China plans to invest 1 trillion yuan ($151 billion) to raise the local supply rate in semiconductors to 70 percent by 2025. In capacity, China outpaced the U.S. and Germany a decade ago. Semiconductors will likely soon join the list of 1,762 where Chinese brands top in the global market.

China, which had a late start in traditional manufacturing, made a head start in the race to a fourth industrial age. China sweeps global standardization in drones, fintech, electric vehicles, and secondary batteries thanks to its economies of scale. In digitalization, it is unrivalled. Nearly 90 percent of transactions on the Nov. 11 Single’s Day shopping extravaganza were made through mobile devices. Xi Jinping in his opening address at the latest party congress mentioned “the Chinese dream” 32 times with confidence.

China is galloping away in the service sector as well. Its foot massage industry is thriving. One shop has nearly 100 therapists at work, but customers usually have to wait a half an hour for their turn. The work is popular among young people because it pays well. Korea still neglects services work. As a result, unemployment does not get better and the economy goes nowhere.

There is only one solution to compete with China. We must keep our market free and open and provide better products and services. The government must radically lift regulations. If we stall, our economy will slowly die like a frog in a boiling pot of water.